The illegal events are known to happen all over the city, but authorities say it’s only gotten worse since the onset of the COVID-19 pandemic.

“It’s actually one of the top two citizen complaints in the City of Albuquerque and this is including you know violent crime like homicides and car burglaries, things of that nature,” said New Mexico State Police Sgt. Steve Carroll, who led the charge to develop new targeted operations to crack down on illegal street racing.

“Usually these drag racers don’t expect law enforcement to do much. They frequent areas where they drag race, we know where these areas are,” said Sgt. Carroll.

Sgt. Carroll told the KOB 4 Investigates team that street racing is more than just a nuisance because it has also compromised public safety. 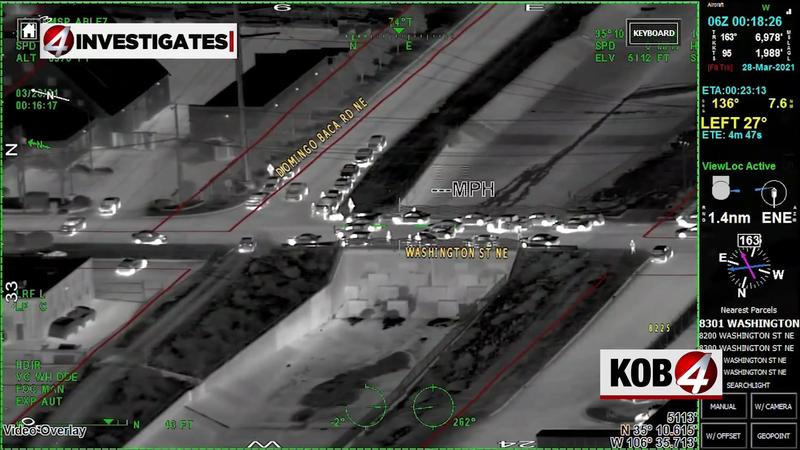 Newly obtained video from a NMSP helicopter reveals the scope of the problem. On March 28th, around 1 a.m., authorities spotted a large crowd in an industrial area in northeast Albuquerque, including more than 100 cars and spectators gathered for an illegal street racing event.

Over the span of two weekends in March, NMSP cited at least 200 people for street racing and spectating in the Albuquerque area. According to NMSP, 80% of the people cited in the operations were younger than 30 years old and about 10% of those cited were younger than 18.

In 2019, the City of Albuquerque passed an ordinance which outlaws spectators of street racing.

However, enforcement of the illicit activities can be challenging, especially when drivers leave the boundaries of the City of Albuquerque.

4 Investigator Nathan O’Neal: “I know some of these events tend to happen where they might be crossing jurisdictions. Is there a problem there, then, if you don’t have the city ordinance to use as a deterrence?”

Sgt. Carroll: “So that is a good point. The city ordinance only works in the city of Albuquerque, so if they’re racing in the county of Bernalillo, the city ordinance doesn’t apply… right now under state statute, we don’t have anything for spectating drag racing events.”

There is a statewide law that cracks down on street racers themselves but only Albuquerque has a specific law making it illegal to be a spectator. In order to make enforcement uniform statewide, that’s something lawmakers would have to address.

NMSP has future plans to partner with Albuquerque Police and the Bernalillo County Sheriff’s Office to continue to target street racing.

“Hopefully it gets the word out. we continue these operations and these drag races realize that yeah we do care and we are actually going to do something about it,” said Sgt. Carroll.

Within the City of Albuquerque, spectators of street racing can face a fine of up to $500 or 90 days in jail. NMSP is encouraging the public to keep making complaints if you spot street racing in your neighborhood– because that helps police devise a plan on when and where to launch enforcement operations in the future.