ALBUQUERQUE, N.M.- An audit of an entire year’s worth of expenditures reveals the governor’s contingency fund was used to pay for thousands of tax dollars in groceries, liquor, dry cleaning and shoe and boot repairs. The new revelations have prompted Governor Michelle Lujan Grisham’s office to concede “more was purchased than what was necessary.”

What is the appropriate use of this fund?

In recent years, each New Mexico governor has been appropriated a contingency fund to use at his or her discretion. But in 2018, a new law signed by Gov. Susana Martinez created new requirements and limitations of the fund. The law states, “Money in the fund shall not be used to pay or supplement the salary of the governor or any state employee or as perquisites or allowances for state employees." In other words, a governor can’t create a food allowance or clothing allowance with this fund. A perquisite is an item or thing regarded as a special right or privilege enjoyed as a result of one position. The law makes it clear, the governor can’t enjoy special items from this fund just because she holds a position of power.

When the KOB 4 Investigates Team asked legislative leaders how they expect that fund to be used, they said the fund should be available for a governor to promote and market New Mexico in a positive light.

“When we set that (fund up), based on the legislation that was passed, we know that there are extraordinary expenses that any governor is going to have in terms of promoting and marketing the state, in terms of making sure that visiting dignitaries’ needs are being met,” said Rep. Patty Lundstrom, D-Gallup, who is the chairwoman of the House Appropriations Committee.

“When we host visitors from other states or host delegations visiting New Mexico, we want to put our best foot forward and we want to make sure that when there are guests at official receptions, they are treated to some of the many things that we have to offer in New Mexico,” said Rep. Brian Egolf, D- Santa Fe, who is also Speaker of the New Mexico House of Representatives. 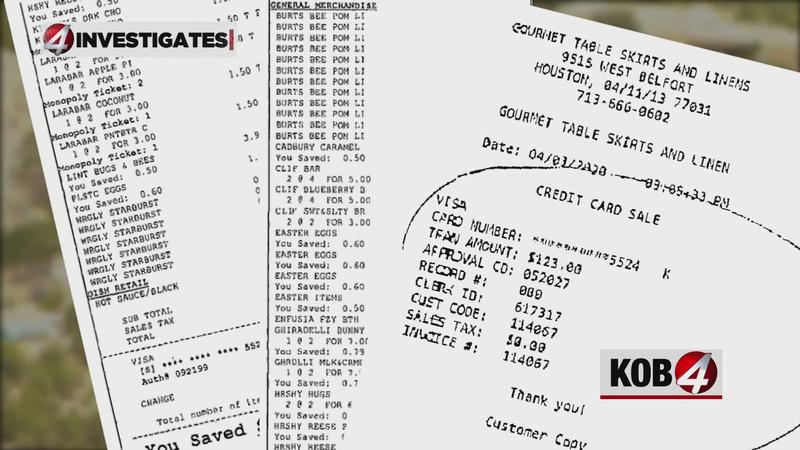 But for nine months out of 2020, the Governor’s Mansion was closed to the public and according to the governor’s office, there have been no dignitaries, VIPs or any marketing events to promote New Mexico at the mansion during this pandemic.

How the fund was actually used

Expenditures provided through an Inspection of Public Records Act request reveal $31,782 was spent in total in 2020. Of that, $16,248 was spent on 153 different trips to Santa Fe area grocery stores. Those grocery trips included $550 in alcohol purchases. The governor also used nearly $800 of the fund to pay for dry cleaning and boot/shoe repairs.

In February, the governor’s spokesman Tripp Stelnicki stated the food was eaten during meetings between the governor and her inner circle. Stelnicki also stated the governor’s New Mexico State Police Security detail ate the food as well. But after checking with NMSP on policies related to an officer’s conduct inside the mansion, a NMSP spokesman stated through an email, “agents provide their own lunch or purchase food using their own financial accounts unless on travel or per diem." Policy does not allow New Mexico State Police Officers to eat the taxpayer paid food inside the governor’s mansion.

Regarding paying for dry cleaning, Stelnicki defended the expenditures.

“That would be an expense, that I would argue, is directly related to her duties as governor– appearing presentable and representing New Mexico well,” Stelnicki stated. “So yes, the dry cleaning would be for her clothing that is used as part of her appearing virtually.”
Receipts also reveal just before Easter 2020, the fund paid for Easter eggs and a variety of candy along with a payment to a table linen company. Despite how it appears, the Stelnicki stated the governor did not host an Easter party, but instead mansion staff Easter baskets for the governor advocates and colleagues. There is no mention about Easter baskets going to New Mexico’s children.

In February, 4 Investigates revealed this fund was also used to pay to clean rugs after the governor’s new dogs created messes.

When Gov. Lujan Grisham took office, the contingency fund was capped at $72,000. The budget currently being debated in the NM Legislature caps the fund at $96,000, a 25 percent increase. KOB 4 requested an interview with Gov. Lujan Grisham. She denied that request. We also requested permission to film the food storage areas of the governor’s mansion. Since New Mexico’s taxpayers paid for that food, we felt you have a right to see it. The governor denied that request as well.

In an email, her spokesman stated, "Upon review, we would agree that at times more groceries were purchased than necessary. The governor is always appreciative of cost saving measures and is glad this was brought to her attention. Moving forward expenditures through the discretionary fund will be more closely monitored to ensure expenses are only what are most necessary and prudent to the execution of her duties as governor."