ALBUQUERQUE, N.M. – This year, people have seen gas prices continue to climb and Wednesday it hit a new record high. According to AAA, regular is going for $4.21, premium for $4.76 and diesel for $5.43 per gallon.

While a lot of stations were below the national average, KOB 4 found one gas station that has a price per gallon so high, it’s causing double takes.

Driving down Yale towards the Albuquerque International Sunport, people pass a small M&M gas station selling regular gasoline for nearly $7.00 a gallon. That price is sending some drivers on a scavenger hunt for a better price at the pump.

“No, I turned around to see if I could find something else,” said Maggie Gonzalez.

One local KOB 4 spoke with says the high prices at the particular gas station is nothing new.

“This has been going on for the last four years, when gas was a $1.85 these guys had it at $4.98. They have been ripping off people for a long time,” Henry Zachery said. 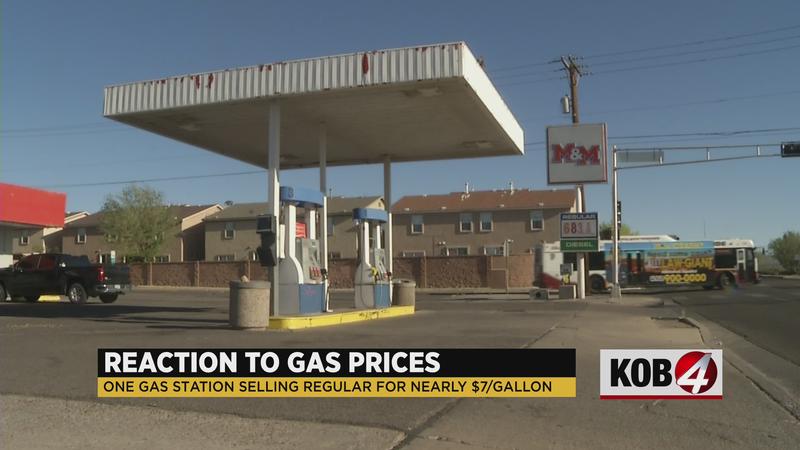 KOB 4 asked the clerk working behind the counter who sets their prices and why is it so high? While he didn’t go on camera, he said the owner can set the price to what ever he wants, it’s his freedom.

Back outside, neighbors have their theories as to why this pump is more expensive.

“They get everybody from the airport that doesn’t know better and not familiar with Albuquerque.”

But even for locals, just seeing $7 is giving them sticker shock.

“Things are crazy it’s getting crazy out here, gas prices like $6 some places, I like to go places below $4,” said Terrance Jackson.

Finding gas at that price anymore is no easy task.

“My bicycle is going to be ready very soon,” Florentino Gonzalez said.

Early Tuesday, KOB 4 reached out to the Independent Petroleum Producers of New Mexico and the New Mexico Oil & Gas Association to ask if there are any regulations to prevent gas stations from charging $2 more than the average price – but they have not gotten back.