Medina hopes the updated program will do both and address violent crime and increasing homicides in the city.

“Number one, help us get information to the families of those individuals who are murdered in Albuquerque especially,” Medina said. “Number two, give the public a transparent view of what’s occurring with their case, how it processed through the system, and who and where decisions were made – that they may not be happy with.”

“With any violent crime, there’s always that loss that a lot of victims feel, whether it’s the loss of innocence, the loss of protection or actually the loss of somebody,” Criminal Investigations Division Lt. Nicholas Sanders said. “Depending upon where that loss happens, a lot of times those individuals are seeking resources answers, guidance, support.” 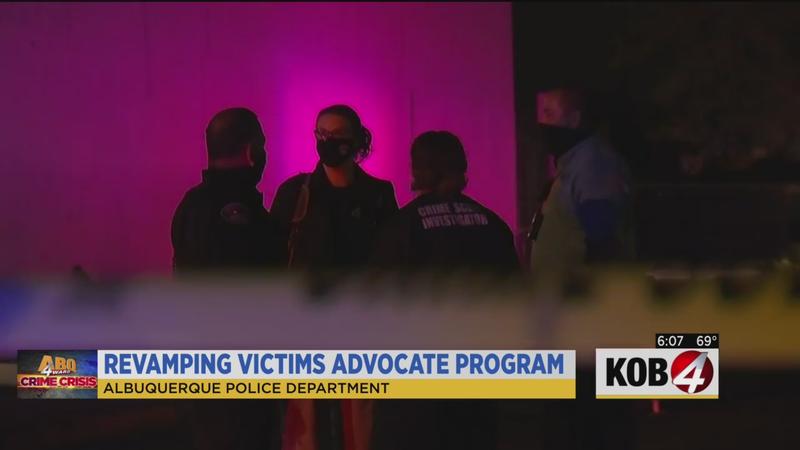 That’s something APD hopes victim advocates can provide so detectives can continue focusing on solving their cases.

“We can’t plan for when the next crime is going to happen, but it’s resource intensive,” Sanders said. “If we have a point in time to say one of my detectives was supposed to meet with the family at 10 o’clock in the morning, seven o’clock at night, and an incident occurs that takes them away from that, that creates that void… we’ve really started to look at how can we help with that void.”

Currently, APD has 3 victim advocates that focus on domestic violence and sex crimes. The department is expanding with the addition of a new victims advocate manager.

“I think it’s this accountability in the end, that’s going to lead to the change,” Medina said. “I think that change comes when the public is aware of what’s occurring, when they have the facts in hand, and they can demand change from the system to ensure that things are handled in a way that the public wants.”

APD officials said every case is different, but the victim advocate could update the family by letting them know if there’s a suspect, when an arrest has been made, or even why a case was dismissed.

“This is about building a team internally, but it’s also about making sure that we exercise community policing, we build those partnerships – and that as a community we start finding solutions to some of these issues,” Medina said.

There’s also plans to add more resources in the future if needed.

They hope the victim advocates will help families in their search for justice.

“It’s kind of putting a personal touch to these cases and making sure that families know that we’re thinking of them, and we’re putting these cases forward and we’re communicating with them the best we can,” Medina said.