ALBUQUERQUE, N.M. — U.S. Sen. Martin Heinrich is behind a new bill to relocate 34 chimps in New Mexico to a federal sanctuary in Louisiana – Chimp Haven. All of the chimps were previously subjected to laboratory testing at a primate facility in Alamogordo, New Mexico.

"Think about our elderly, you know, citizens or parents or grandparents, like, would you want them to, you know, essentially be alone or in a small inappropriate environment for their last days,” said Noelle Callahan, the chief program and policy director Animal Protection New Mexico, an advocacy group.

In 2000, Congress passed the Chimp Act, a bill requiring the National Institutes of Health to relocate chimps no longer needed for research to Chimp Haven. In 2019, the NIH announced 44 chimps would be kept in New Mexico claiming they were not healthy enough to travel. Those chimps have been living at a facility at Holloman Air Force Base in southern New Mexico.

From 2016-2018, 94 chimpanzees were safely transported from Holloman Air Force Base to Chimp Haven.

"The chimps are, you know, they’ve been used in experimentation. They’re not in perfect health, but that for us, that’s the exact reason they should go to Sanctuary” she said. 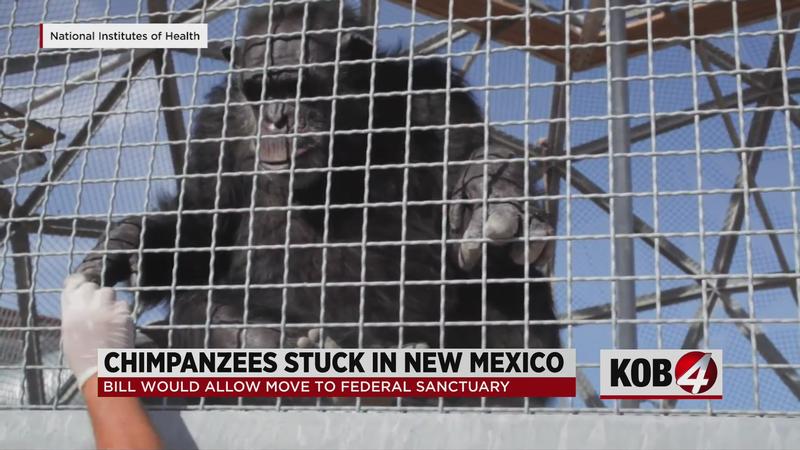 Callahan says 10 of those chimps have since died.

Laboratory testing on these chimps ended nearly 20 years ago, but Callahan believes their current living conditions are still inhumane.

“It’s a lab facility, you know, it was designed for experimentation on chimpanzees, and that’s in staff that’s there. That’s, you know, what they’re trained to do" she said.

The new bill was just introduced and still needs to make it through congress. If approved, the chimps will have to be relocated within 180 days.

Callahan hopes they won’t have to wait that long, "They’re our closest relatives. They’ve suffered a lot. You know, especially These that were either born in the lab or taken from the wild and they deserve, the very least they deserve is there to end their remaining years at Chimp Haven."

"Throughout my time in Congress, I have been advocating for a humane and permanent solution for chimpanzees housed at Holloman Air Force Base in Alamogordo, New Mexico, so they can live out the rest of their lives in a non-laboratory sanctuary environment," said Heinrich. "Back when I was serving in the House, I called on the NIH to permanently retire the more than 200 chimpanzees at the Alamogordo Primate Facility who had previously been subjected to biomedical research. We have a moral responsibility to prevent senseless animal cruelty and provide the 34 chimpanzees who remain at Holloman and the numerous other primates housed in similar facilities across the country with a humane living environment and the best possible care for the remainder of their lives."