ALBUQUERQUE, N.M. – The City of Albuquerque is backing a number of bills in Santa Fe as part of a larger Metro Crime Initiative. On Tuesday, officials asked everyone in the metro area to help with the legislative push.

“April 21, 2021, my son Ryan was lured to the park through social media, and set up, murdered,” said Ryan Saavedra Sr. Saavedra Sr. knows the worst of Albuquerque’s violent crime crisis.

“My world flipped. I can’t believe this has happened to me in the city that I chose to raise my son in,” said Saavedra Sr.

Tuesday, he joined Albuquerque officials in the hopes of reducing violent crime.

“I support these bills that need to be passed,” Saavedra Sr. said.

The city is backing a number of bills they believe will protect not only Albuquerque residents, but the entire state. Many of the bills focus on tackling gun violence.

“We’re saying we’ve got to move the pendulum a little bit towards being tough on gun crime. That is obviously where lives are lost and that’s where we need help up in the legislative session,” said Mayor of Albuquerque Tim Keller.

Albuquerque police say gun crime is on the rise.

The city is backing Senate Bill 120, which would increase sentencing enhancements for using a firearm in the commission of crime, and House Bill 9, which would make it a crime if parents do not properly store their firearms and their kids use it to commit a crime.

The city would also like to see funding for violence intervention programs statewide, and the Gibson Health Hub.

But Keller said they need people’s help to get these bills passed.

“We literally need action to help fight crime in the metro now, that’s what we’re asking for help within the next 15 days,” said Keller.

City officials are hoping residents will contact their legislators and voice their support for bills. You can sign up online at cabq.gov/mci to get alerts straight from the city.

“We will send out updates and alerts on letting you know what committees the bills are in. And what you need to do, or what we would ask you to do, is contact members of the committee who share your views and really tell them why these bills are important for tackling crime,” said CABQ Deputy Director of Public Affairs Helen Maestas. 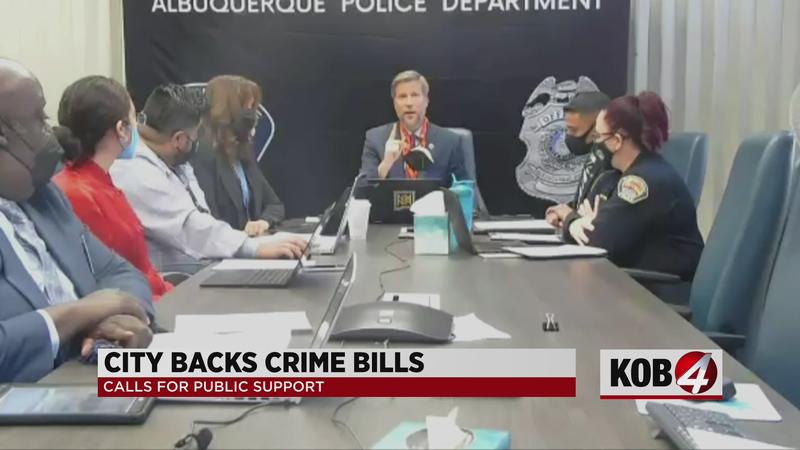