ALBUQUERQUE, N.M. – Albuquerque officials are cracking down on dangerous driving.

Automated mobile speed enforcement got the go-ahead from city council Monday. So what does that mean for the Lead/Coal corridor?

It’s really too soon to say. The city will still need to go through the RFP process to select a vendor and device. But, when it comes to the Lead/Coal corridor, a big van wouldn’t really fit there.

The ordinance also does not designate specific areas for enforcement beforehand – that is something city officials said will be selected based on data that identifies high-risk/high-speed corridors.

People in and around the Lead and Coal corridor have been searching for solutions for a long time. Excessive speeding is just part of the problem.

“One day I was actually going down Lead and I saw an accident and then I was coming back home down Coal and I saw almost the same accident in the same direction,” said Kami Harcrow, a resident. “Two cars had flipped up onto the curb and had hit the concrete post. Almost at the same block.”

Harcrow said she walks her dog in the neighborhood all the time. It’s a walk they’ve gotten used to.

“He actually starts barking and loses his mind a little bit if someone is going faster than the speed limit," said Harcrow.

“We’ve got an increasingly aggressive group of people on the streets and I think we need to face up to that,” said Isaac Benton, Albuquerque city councilor.

“Unfortunately, we timed the lights on Lead and Coal and it hasn’t made that much of a difference,” said Mayor Tim Keller on June 15. “I think it’s certainly better but it still isn’t doing the job.”

Now that the idea is turning into reality – many wonder what to can expect. City officials said there are other possibilities for the program, like cameras mounted on trailers or other small devices.

“It’s a big issue,” said Harcrow. “It’s noise and it’s dangerous. So anything they could do would be good.” 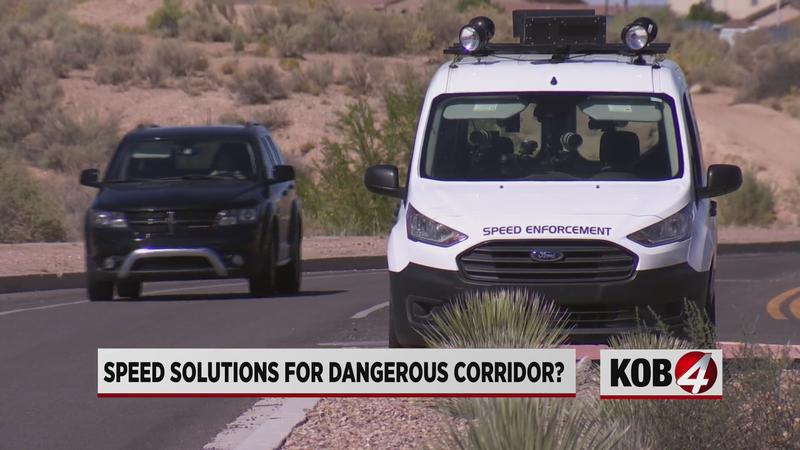