OTERO COUNTY, N.M. – Otero County commissioner Couy Griffin is in Washington, D.C. awaiting trial for his part in the attack on the Capitol building last Jan. 6.

He’s charged with disorderly conduct and knowingly entering restricted areas of the Capitol grounds. KOB 4 spoke with him this Sunday afternoon and he said he believes if the law is followed and applied impartially and without political influence, he should have a good day in court.

Griffin still stands by the fact that he went to a peaceful protest of the 2020 elections that day — he says he still believes there was fraud in them. He also said that there was nothing violent done anywhere close to him that day.

One of his lawyer’s arguments will center around the location of former Vice President Mike Pence last Jan. 6. Griffin says that will help prove that he was allowed to be in the area where he was that day.

"I never was told to leave, I never was told I couldn’t be there, and I never saw a sign that said I couldn’t be there. I thought that we the people own the property around the Capitol,” he said. "The opinion that the judge gives tomorrow isn’t just only about me but it’ll be about tens of thousands of others that are just like me that were standing outside of the Capitol."

However, documents from prosecutors show they plan to use video that Griffin posted to social media to prove he knowingly entered a restricted zone. Prosecutors say the man who shot that video of Griffin will testify.

Griffin’s case is now the second going to trial, while hundreds of people are charged in connection to the day.

"I’ve been tried, convicted, and sentenced for a crime that I haven’t even been able to have my day in court on. So I’m looking forward to tomorrow and you know you never want to count your chickens before they hatch but I believe all of ours are gonna hatch and we’re gonna have a great day,” said Griffin.

Prosecutors may also point to comments Griffin made at a county commissioners meeting days after the Jan. 6 attack.

Griffin is also the founder of Cowboys for Trump, and he’s facing a misdemeanor charge for a violation of the Campaign Reporting Act.

So far, Griffin has failed to file any required reports, or pay a necessary fine. 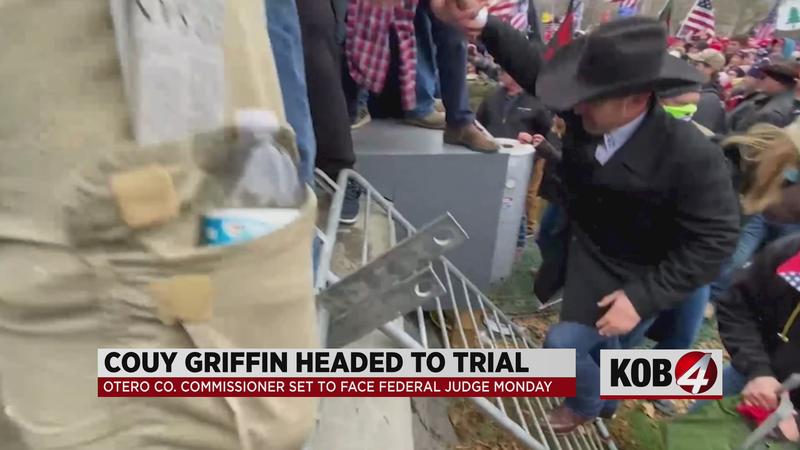