‘Cowboys for Trump’ founder to stand trial for role in Jan. 6 riot

OTERO COUNTY, N.M. — Couy Griffin, Otero County commissioner and Cowboys for Trump founder, is on his way to Washington, D.C. to stand trial. Griffin is charged with disorderly conduct for his part in the Jan. 6 riot and knowingly entering restricted areas of Capitol grounds.

His case is the second to go to trial among the hundreds arrested and charged in connection to the riot. The first trial was held earlier this month for Guy Reffitt of Texas. He was found guilty of all five counts he was charged with.

As for Griffin’s case, KOB 4 is getting an idea of what prosecutors plan to argue at trial, thanks to newly-filed court documents.

In those documents, prosecutors said they will use video that Griffin posted to social media to prove he knowingly entered a restricted area on Jan. 6. Prosecutors also said Griffin’s associate Mark Struck – who both recorded the video and was granted immunity – will testify.

Video from Otero County Commission meetings where Griffin commented on what happened on Jan. 6 will also come into play. 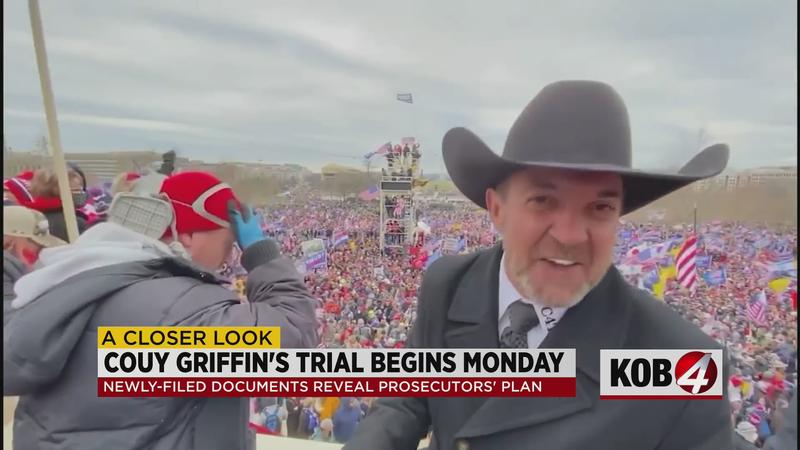 "My day consisted of everything non-violent and patriotic, but the media is trying to paint a different picture, and, unfortunately, they’re having success at it," Griffin said.

Griffin has argued that the Capitol was not an "unauthorized zone" after the former Vice President Mike Pence left the building. Prosecutors said whether or not the vice president was in the building doesn’t matter in this case.

Prosecutors have filed to restrict testimony so the Secret Service agent won’t have to reveal the former vice president’s exact location – but said the agent will be able to testify that Pence never left the restricted area.