ALBUQUERQUE, N.M. – A little more than a week after holding their pre-primary convention in Roswell, officials with the Democratic Party of New Mexico announced how candidates finished in delegate voting.

The Party announced how their delegates voted in Zoom call Sunday. The voting by delegates is a barometer of how much support a candidate has among delegates. All candidates who file for office must obtain at least 20% of delegate votes to advance to the primary through the delegate process.

Individuals who do not meet that threshold do have the opportunity to still qualify for the primary if they get additional petition signatures.

Sunday’s Zoom call came after nearly a week of delegates voting by phone and online. Jessica Velasquez, chair of the Democratic Party of New Mexico, said a total of 1,141 delegate ballots were cast. She added that about 1,000 people attended the March 5th pre-primary convention either in-person or virtually.

Democrats though do have four offices where more than one candidate has filed to be the party’s nominee.

In New Mexico’s 2nd Congressional District, Gabriel Vasquez received the overwhelming majority of delegates in his bid for the party’s nomination.

Vasquez, a Las Cruces city councilor and former aide to U.S. Senator Martin Heinrich, received 80.43 % of delegate support over Dashcan Patel, a doctor from Hobbs, in his effort to be the party’s nominee. Patel got 19.57%.

The winner will face Republican Congresswoman Yvette Herrell in November.

The eventual winner of the primary will face Republican Jeremy Gay. Democrats have held the office of attorney general since 1991.

In the contest for state treasurer, Laura Montoya won more support then Heather Benavidez among party delegates. When votes were counted Montoya got 58.29 % to 41.71 % for Benavidez. Whoever prevails in the primary will go up against Republican Harry Montoya in the general election.

Two Democrats are also competing for the party’s nomination for state auditor. Zachary Quintero won 61.81% of delegates compared to Joseph Maestas who got 38.19%. Republicans are not fielding a candidate for state auditor.

Congresswoman Melanie Stansbury of the New Mexico First congressional district and Teresa Ledger-Fernandez of the 3rd district also do not face primary opposition.

This season though the party is looking to protect those gains amid rising inflation and a political climate that favors Republicans.

Velasquez though said on the call she is confident Democrats can have a good year in 2022, pointing to a strong roster of candidates in New Mexico, record high participation rates among voting delegates and energy from party activists.

“I have been absolutely gob smacked by the level of enthusiasm and momentum we have seen,” she said on the zoom call.

Velasquez added the party plans to actively campaign throughout the state, including in parts of the state that lean heavily Republican.

“In 2022, we are absolutely committed to reaching voters in every corner of New Mexico because we know there are Democrats in every New Mexico county and their voices deserve to be heard,” she explained.

Despite poor showings in recent election cycles, Republicans too have been bullish about their chances in November.

Last week, the Republican Leadership Committee, a national organization dedicated to electing Republicans, listed New Mexico among the state’s it would be targeting in 2022.

In a press release, the organization said New Mexico presents the party with an opportunity for meaningful gains.

’Given the current out-of-control inflation and highest fuel and energy prices in state history, public sentiment for progressive eco-activism and coastal elite donors has significantly waned in the solidly blue state,” the release states.

In an email Sunday night, Patel indicated that he plans to press forward with his campaign for the party’s nomination, Vasquez’s is switching his focus to the general election.

During the Zoom call, he referenced the strain that high inflation and rising prices are having on New Mexicans.

“I recognize that in New Mexico and in my district, it is hard to get a job that lets you care for your family today and put money away for tomorrow,” Vasquez said.

He also assailed Herrell, as out of touch and divisive, saying she is beholden to extremism.

Vasquez described Herrell’s vote against certifying the win of President Joe Biden in the 2020 presidential election as “voting to undermine our democracy.”

The Democratic Congressional; Campaign Committee also lists Vasquez as among the candidates it is backing in races for House seats now held by Republicans.

Pandemic era changes made by the party allowed delegates to cast their votes over a period of multiple days and online or by phone as opposed to one day of in person voting at the convention.

The Republican Party of New Mexico, who attempted to use an email-based voting system at their Feb. 26 convention, before it malfunctioned, said in a press release March 7 that such a process allowed potential voter fraud.

However, Velasquez said she hopes the changes remain permanent, saying a longer period for voting brought about a record level of participation.

“We had time to chase down ballots and verify every single vote as they came in,” she said. 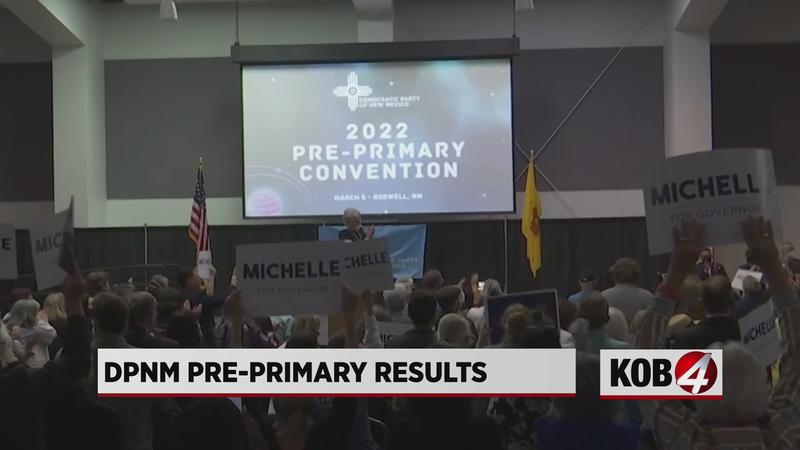