Election audit backers call for ballots to be counted by hand

ALAMOGORDO, N.M. – As early voting starts in this year’s New Mexico primaries, some people in Otero County say they want to ditch their vote tabulating machines in future elections, and count all ballots by hand.

The suggestion came during a special meeting of the Otero County Commission Monday night, which was scheduled to discuss the findings of a controversial audit of the county’s 2020 election results.

“My appeal to you all, is we’ve got to get rid of the machines,” said David Clements, a former business law professor and conservative attorney who along with his wife Erin is leading the New Mexico Audit Force, a group of volunteers canvassing the 2020 election results.

The machines Clement is referring to are vote tabulating machines produced by Dominion, a company that produces election machines.

In New Mexico, all elections are held using paper ballots, but they are counted using machines from Dominion.

Backers of unproven claims made by former President Donald Trump and others who say Trump lost the 2020 election because of widespread voter fraud, say the machines were hacked and information manipulated to engineer a Trump loss. 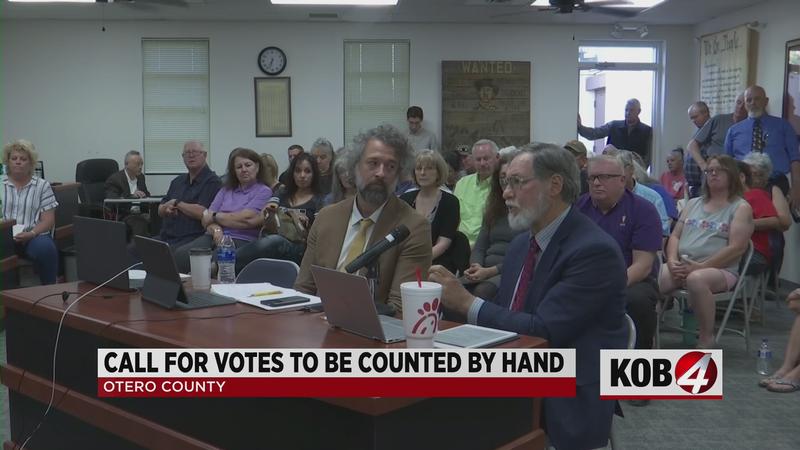 Such accusations have been denied by local and state election officials around the country and others at the federal level, including William Barr, who served as U.S. Attorney General during the Trump administration.

Clements and others at Monday night’s meeting, believe the machines, were vulnerable to hacking and that votes can be switched.

Jeffrey Lenberg, an expert on state-nation vulnerability systems, echoed that belief at the meeting.

“As an expert, knowing what we can do with computers, we can do anything. They haven’t made a system we can’t break into,” Lenberg said.

Many in the room expressed skepticism about the role computers have played in elections. Those include Couy Griffin, an Otero County Commissioner and the founder of Cowboys For Trump.

“Anything that has data that’s digitally stored in the world that we live in today. I don’t care if it’s hooked up to the internet or not, it is still susceptible to hackers,” Griffin said.

For its part, Dominion has denied the allegations.

“All independent reviews by qualified election authorities, including hand counts and audits following the 2020 presidential election, have proven that Dominion voting machines produced accurate results in New Mexico and other states,” a Dominion spokesperson said in a statement.

Griffin added that in the near future, the county will hold a special public hearing to gauge whether or not residents still want to use the machines to tabulate the votes.

But any action beyond that is likely to be limited. Both the New Mexico Secretary of State’s office and Otero County Clerk Robin Holmes said it is state law that determines that the machines must be used. Meaning any changes would have to be approved by the state Legislature.

Also at the meeting, county attorney R.B. Nichols said that EchoMail, the Massachusetts-based company the county entered into a $49,000 contract with to help conduct a forensic audit back in January, ended its contract with the county prematurely.

The audit sparked controversy, and in March the House Oversight and Government Reform Committee voted to launch a congressional inquiry into the audit, over concerns about possible intimidation of voters.

Nichols said due to the inquiry and the negative publicity the resulted from it, EchoMail ended their contract with the county in March.

According to Nichols, EchoMail handed over 16 pages of findings from an audit that was still in its early stages at the time and that based on it, no voter fraud was found.

He added the county had paid EchoMail half, or $24, 875 of the total sum when the audit began. Because they decided to pull out of the project, Nichols said EchoMail agreed to pay the county back $15,125 of that sum.

Clements said that despite the decision of EchoMail to pull out, the audit will continue with other firms and individuals coming forward to take on the work.

Otero County Commissioner Gerald Matherly said there are no other plans at the moment to enter into a contract with any other company regarding the audit.