SANTA FE, N.M. — Jeannine Jaramillo, the woman at the center of a deadly pursuit on I-25 earlier this week, claimed she was kidnapped by a man at knifepoint. However, she has claimed that before, and she spoke to KOB 4 to share her story.

Jaramillo told KOB 4 that she and a man she was briefly dating, Mark Lopez, were at a Santa Fe apartment complex where everything started.

"I wanted to come home and he didn’t want to bring me, and it started a big argument. I was yelling for help to this one man who lived at the apartment and he did help me, he called 911," Jaramillo said.

She said he pulled out a knife and kidnapped her, leading to a chase on I-25. She said he also had a gun.

She said she was scared for her life as everything unfolded, and she blacked out briefly during the crash and doesn’t remember how the suspect escaped the car. 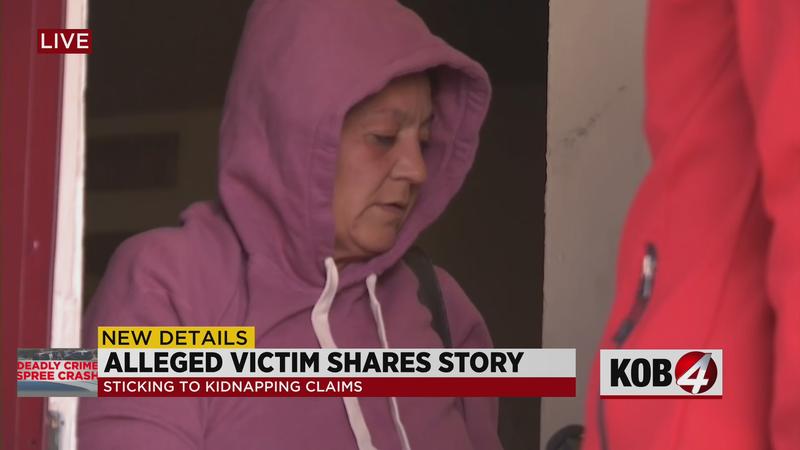 "I crawled out the driver side window, I fell to the ground and I looked up and there was the police, and I just ran for my life, and I was screaming help me," Jaramillo said. "I’m crying, I was hysterical, I was in shock."

Jaramillo had a cast on her right arm. She said she broke it in the crash.

Jaramillo said she has been in constant contact with investigators, even claiming she just got off the phone with them before talking to KOB 4.

"I don’t wish that on anybody to go through," she said. "I was in terrible fear for my life and I just don’t want to ever go through this again."

As for the man she identified as Mark Lopez – authorities questioned a man with that name and said he wasn’t involved at all.

In a shocking twist in this tragedy, search warrants reveal officers involved in Wednesday’s chase never saw anyone but Jaramillo get out of the car they were pursuing. KOB 4 asked her about that troubling detail.

However, Jaramillo has been in this situation before, multiple times – as recently as last September and October in Grants. Court documents show police accused her of lying about a boyfriend being involved in serious crimes she committed – with Jaramillo claiming in one of those cases that she was held at knifepoint during a police chase. But investigators said they never found boyfriends in either situation. KOB 4 asked her about those cases.

"My life has been pretty rough lately," she said. "I mean, I haven’t made the best choices in relationships at all lately. And it seems I’m just going to stay single because this is too much."

Right after the interview, Jaramillo told KOB 4 she is frightened for her life so she is leaving her apartment and going to stay somewhere else in town. We asked if she plans on staying in contact with investigators – she said yes, but she said she doesn’t have a cell phone right now because it was destroyed in the crash. State police have not commented about any of these developments.

Click on the video above to watch her full interview.