Crews have been flying while they still can, dumping water on the Calf Canyon/Hermits Peak fire burning near Las Vegas. The fire is still the largest in the nation, and fire officials say dangerous fire conditions starting Saturday will likely cause it to reach new areas.

"We are expecting extreme winds really for the next six days," said David Bales incident commander.

The biggest concern for firefighters is the wind pushing embers from hotspots into fresh, unburned territory up to a mile away.

"We are worried about the spotting of course that comes from the interior of the fire and spots over a dozier line or retardant line," said Bales.

Which is why they focused on protecting homes in harms way.

"We have lots of what we call structure protection crews and engines. Groups that are out assessing potentially where these fires want to go and assessing structures, treating structures, prepping them for fire," Bales said.

"We have something like 60% of the nation’s cache of that kind of equipment right here on this fire," said Heinrich.

Heinrich was at the Las Vegas evacuation center, handing out supplies and speaking with those who had to leave.

"It’s devastating. We’re just, we’re seeing fire behavior that we have not seen before and it’s driven by these wind events," Heinrich said.

He says firefighters need the communities’ support right now, and that means being responsible.

"We can’t afford any more fires. So please everyone around the state, no fire starts," said Heinrich.

Heinrich talked about the concerns over one of these two fires sparking because of a prescribed burn, he says while that is important – there are more pressing issues.

The senator also talked about the new application process for receiving federal relief money. He addressed some issues those who were impacted by the fire ran into, saying even if you apply and are told you are ineligible, you need to call his office or FEMA officials.

While firefighters are working hard, equipment is being stolen. Officials say people are sneaking into evacuation zones and taking them, and they are asking the community to be on the lookout for any suspicious activity and to report it. 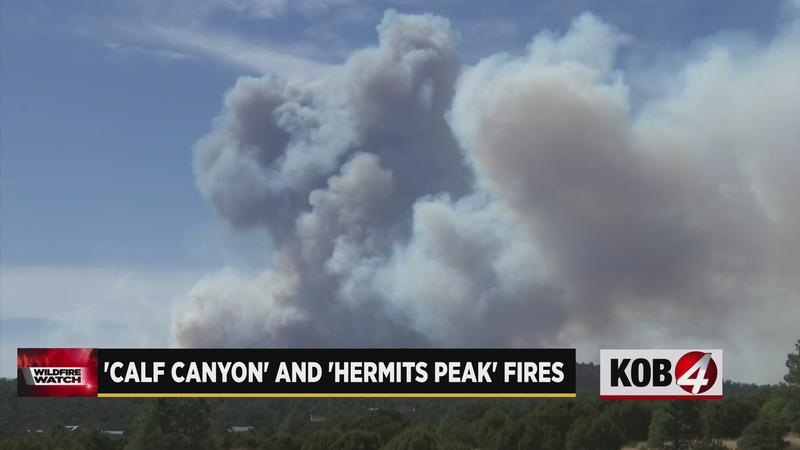