ALBUQUERQUE, N.M. — It’s very rare that stolen goods are returned to their rightful owner. When an Albuquerque woman caught a thief on camera, stealing a 200-pound quartz crystal cluster from her backyard, she didn’t have any confidence that she would ever see even a piece of it again.

"When I saw the thief holding that crystal, it was like he was holding my heart. And when he dropped the crystal, he broke my heart,” said Frances. She found small pieces of the crystal outside her Northeast Albuquerque home. "I just felt like, OK it’s gone,” she said.

But little did she know, a good Samaritan was looking out for her on the other side of town.

A man who is currently in recovery, and trying to live a better, sober life, said he saw KOB 4’s original story about the crystal theft two weeks ago, and recognized the crystal when he saw a big piece of it for sale around Zuni and Alcazar in southeast Albuquerque.

"I would want somebody to do it for me,” he said. “I try to break the stigma of people who are urban or felons living in the war zone. We’re not all bad and we want to do what’s right."

They met face to face for the exchange. When Frances saw the piece, she said she immediately knew it was hers.

"This is a miracle,” she said. "It’s gorgeous, it almost looks like it’s meant to be. And I’ll tell you it’s not going to be outdoors anymore. It’s going to be inside."

The man didn’t want anything in return, not even the $20 he paid for the piece. Frances brought him a larger one of the broken pieces she found near her driveway. 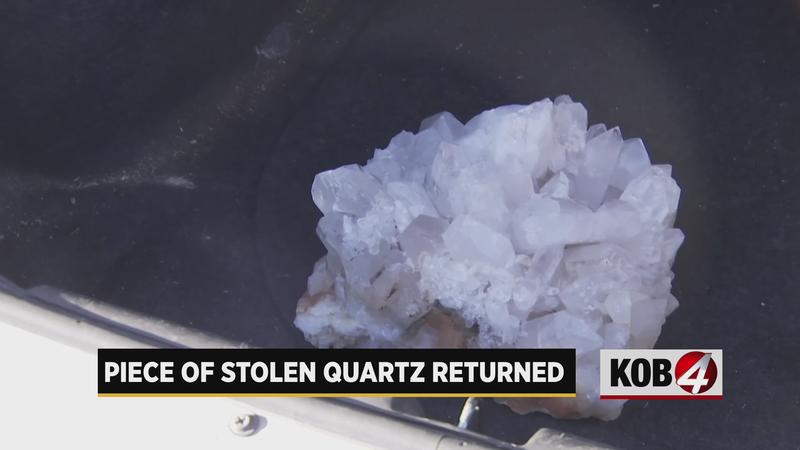