MORA COUNTY, N.M. – The Calf Canyon and Hermits Peak fires now have the attention of not only state leaders, but federal ones too. Gov. Michelle Lujan Grisham signed a presidential disaster declaration Monday and submitted it Wednesday, in order to bring in "nearly unlimited" resources to help New Mexicans in the fire zone.

The declaration will bring in every resource the affected people and wildlands need to recover quickly. The governor says it will help make New Mexico, and individuals, whole, after weeks and potentially months of suffering.

The governor signed it Monday and now it will go to President Joe Biden. The actual declaration will come from Biden and FEMA.

"This will be an opportunity with this declaration for recovery efforts remember it’s public assistance to that means focusing on watersheds, watershed restoration, mitigating, anything from monsoon seasons and flooding, picking up debris, really hitting that hard, that will also help us mitigate fire risk," said Lujan Grisham.

The governor mentioned that agencies have now spent $29 million in northern New Mexico. They’re spending $2 million per day to put these fires out. She also mentioned that the state itself has more emergency dollars that it can and will direct to these fires.

Meanwhile, the Glorieta Adventure Camp has now become a temporary home for the United World College in northern New Mexico.

School officials say they expect to be displaced for the rest of the school year, so right now their goal is to try and make it as normal as possible.

Ever since the Hermits Peak and Calf Canyon fire started earlier this year, United World College-U.S.A. started preparing to evacuate.

“We were on campus thinking okay, there’s a chance we might evacuate in the coming few days,” said Ian Palanga, United World College student.

Then on Friday, the fire got too close for comfort and more than 200 students, faculty and staff were forced to evacuate.

“I think what went through my head is that this is the new normal and that all of the work that we are doing at the school around sustainability around really raising awareness about climate change it’s right here, I think that was my first thought,” said Victoria Mora, UWC-U.S. president.

At the Glorieta Adventure Camp, they are holding classes and students are studying for their final exams – even though they are trying to have a normal school year, the students say they can’t forget why they are here.

“That’s really important to know that some people are luckier than others in this scenario, you know not everyone still has their homes. And it’s important to be generous and accommodating to our little community that doesn’t have a lot of means,” said Joaquin Romero, UWC student.

As for their campus that has been evacuated, Mora says they regularly clear debris and timber away from the school, so they are hoping it is still there when they go back.

PNM posted an update on Twitter that all customers in Las Vegas still have power. Some businesses and grocery stores have been temporarily closed because of staffing, but the power is on. They finished the post by saying, “this area is resilient, strong, and the company is standing alongside you.” 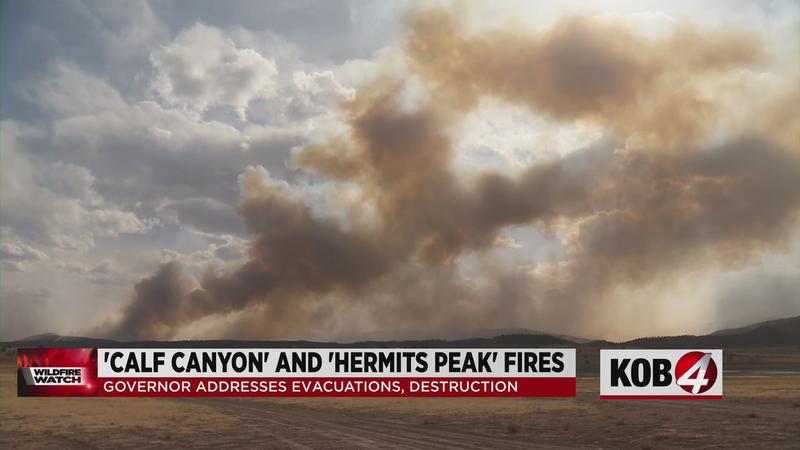