HOBBS, N.M. – Even with less than a week before lawmakers wrap up the 30-day legislative session in Santa Fe, Gov. Michelle Lujan Grisham is confident the Legislature will give her all of the $85.5 million she has requested for the state’s opportunity scholarship program.

Lujan Grisham told a group of students and college presidents at a roundtable discussion Thursday at New Mexico Junior College that the Legislature will set aside $75 million for the ambitious scholarship initiative. She expects the rest to be provided as the state budget moves through the legislative process.

“I have no doubt we are going to get the other ten, but if for some reason — $10 million is real easy for me to get off the top —- halfway through the next legislative session — legislators are going to make sure that happens,” she said

According to Lujan Grisham’s office, the additional money will assist another 35,000 New Mexico students by covering tuition and other fees for college degrees, certificates or licenses.

Currently, the Opportunity Scholarship program, established in 2020, covers tuition and fees of New Mexico students seeking four-year degrees or certificates from anyone of New Mexico’s institutions of higher learning or tribal colleges.

Lujan Grisham said the scholarship is meant to fill the gaps that exist in the state’s Lottery Scholarship program, such as non-traditional students, like those who are not able to reach their education objectives in four years and those who have to hold a job or care for family while taking courses.

“So Opportunity scholarship is intended not to disrespect any person’s individual choice. But to embrace all of these choices to create an economic ecosystem that will allow you to decide your own future in the way that you want that future to materialize,” she said.

Beyond the individual students, Lujan Grisham said the education gained through the scholarships could help address some of the workforce shortages in the state, such as in the field of healthcare.

“It is exactly what the state should be doing, these are our resources and we should be using them to invest in the young people in the state who are interested in solving problems and supporting any number of critical areas,” she said. 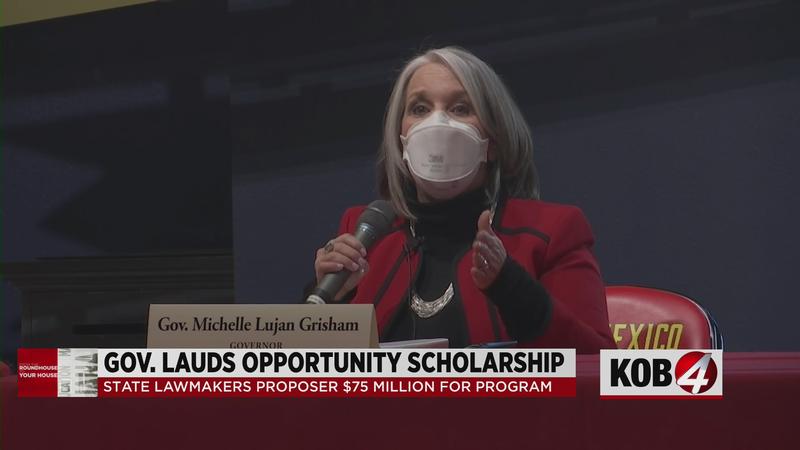