HOBBS, N.M. – A newborn baby left in a bag in a southern New Mexico dumpster over the weekend was found alive. The teenage mother reportedly confessed.

This unbelievable story could have had a much worse ending – had three unsuspecting angels been at the right place at the right time.

The baby is alive and stable Sunday night in a Lubbock Hospital. The 18-year-old mother, Alexis Avila of Hobbs, has been charged with attempted murder and felony child abuse.

But who knows what would have happened to her – or the baby – if it weren’t for three random people and a well-placed surveillance camera.

"Something wasn’t right, I saw the officers’ faces, and they did not look right. They really didn’t,” said Joe Imbriale owner of Rig Outfitters and Home Store.

He said police called him Friday night, with a request to view his surveillance footage.

"I said ‘what is it we are looking for’ and she goes ‘we’re looking for somebody who dumped a black garbage bag in your dumpster.’ I turned around, I said ‘please don’t tell me it was a baby,’" said Imbriale.

Video shows who is believed to be Avila leaving the dumpster at 2 p.m. Friday afternoon. Six hours later, three people are seen searching through the same dumpster, pulling out a black bag, and start looking through it.

Seconds later, a woman reacts to what’s inside and starts opening the bag. She pulls out the newborn baby, still alive – and tends to it.

Once the child is wrapped up, she brings it to their truck while a man in the group is on the phone. They pull the truck away from the dumpster, and people can see police and an ambulance arrive minutes later. Police immediately start looking in the dumpster, and paramedics take the child to a local hospital.

"I was in shock just to see this,” Imbriale said.

He said he couldn’t believe his eyes as he reviewed that video with police.

"I can’t sleep at night just knowing that this baby was just tossed in a dumpster like that. I’m sorry but who does that? That is evil. I don’t have words for it."

As for Avila, investigators located her car over the weekend. They say she confessed to giving birth to the baby – and taking it to the dumpster.

According to the criminal complaint, Avila admitted to not knowing she was pregnant until a Jan. 6 doctor’s appointment to address abdominal pain. On the day of the birth, she had pain and went to the bathroom, where she "unexpectedly" gave birth to the child.

Avila reportedly panicked as she cut the umbilical cord, wrapped the baby in a towel, placed them in a bag with some trash and put the bag in another bag she tied to keep it closed.

The complaint stated Avila remained quiet when asked what she thought would happen by putting the baby in the bags and dumping it. 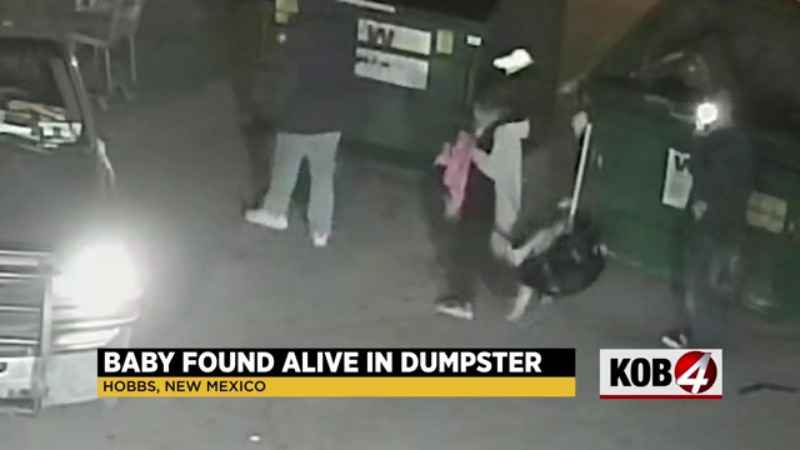