WASHINGTON (AP) — A federal judge on Wednesday acquitted a New Mexico man of misdemeanor charges that he illegally entered the U.S. Capitol and engaged in disorderly conduct after he walked into the building during last year’s riot.

U.S. District Judge Trevor McFadden issued the verdict from the bench after hearing testimony without a jury in the case against Matthew Martin. McFadden, who was nominated by former President Donald Trump, acquitted Martin of all four counts for which he was charged.

Martin did not dispute that he joined hundreds of other people in entering the Capitol building during the riot. The judge said Martin’s actions were “about as minimal and non-serious” as anyone who was at the Capitol on Jan. 6.

Martin is the third Capitol riot defendant whose case has been resolved by a trial. He is the first of the three to be acquitted of all charges that he faced,

Martin, whose bench trial started Tuesday, testified that a police officer waved him into the building after the riot erupted. A prosecutor dismissed that testimony as “nonsense.” 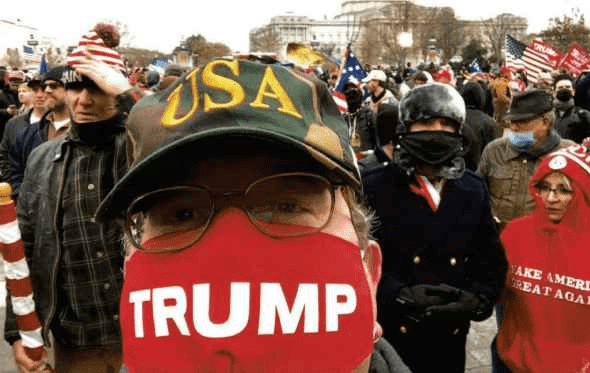 The judge, however, said video shows two police officers standing near the Rotunda doors and allowing people to enter as Martin approached the doors. One of the officers appeared to lean back before Martin placed a hand on the officer’s shoulder as a possible sign of gratitude, the judge said.

McFadden described Martin’s testimony as “largely credible." The judge said it was not unreasonable for him to assume that officers allowed him to enter the Capitol, even though alarms were blaring and broken glass was strewn about the floor.

The first two Capitol riot trials ended with convictions, although McFadden acquitted one of those defendants of a disorderly conduct charge after a bench trial last month. A fourth trial is being held this week in Washington, D.C., for a former Virginia police officer charged in the attack.

Matthew Martin and his lawyer speak outside the courthouse after his acquittal. Martin wants his job back. pic.twitter.com/QwYD7RhOMs

The judge said Martin appeared to be a “silent observer of the actions of others." McFadden didn’t find any evidence that Martin joined others in shouting and chanting inside the Capitol or that he intended to disrupt Congress from certifying Joe Biden’s 2020 electoral victory.

Dozens of Capitol riot defendants have pleaded guilty and been sentenced, but Martin is the first to testify at a trial. His acquittal could embolden others to gamble on a bench trial, although McFadden so far is the only judge to preside over one and decide a case.

Martin said he “went with the flow” as he approached the Capitol and testified that he saw a police officer wave him into the building. Martin remained inside the Capitol for about 10 minutes after entering the building through the Rotunda doors, according to prosecutors.

Martin said he “enjoyed the day” of the riot.

“It was a magical day in many ways,” he testified on Tuesday before adding, “I know some bad things happened.”

At least nine people died in the riot or its aftermath. More than 100 police officers were injured. One officer died after he collapsed hours after being sprayed with bear spray and other officers who tried to quell the riot died by suicide in the months following the attack.

Prosecutors said Martin, an engineer, worked for a government contractor at the National Laboratory in Los Alamos, New Mexico, and held a top-secret security clearance on Jan. 6. Martin said he actually worked at a different facility in Los Alamos.

Defense attorney Dan Cron said Martin saw another person shake a police officer’s hand after entering the Capitol. Martin placed his hand on an officer’s shoulder “as a gesture of thanks and of good will,” Cron said.

“It was a very loud scene there. There was a lot going on there to try to process,” Cron told the judge.

Martin wasn’t accused of engaging in any violence or destruction.

“The whole time he’s in there he’s just standing there,” Cron said.

Romano, the Justice Department prosecutor, said Martin joined the mob in crowding police officers who were trying to disperse the crowd. The prosecutor said Martin knew that he wasn’t allowed to be in the Capitol.

“The idea that he thought he had permission to do that is nonsense,” Romano said.

Other riot defendants have also claimed police waved them in or said they could enter, but it is unclear how that testimony will be viewed by the courts.

McFadden presided over a bench trial last month for Cuoy Griffin, a county official in New Mexico who helped found a group called Cowboys for Trump. The judge on March 22 convicted Griffin of illegally entering restricted U.S. Capitol grounds but acquitted him of engaging in disorderly conduct.

On March 8, a jury decided the first Capitol riot trial by convicting a Texas man, Guy Reffitt, of storming the Capitol with a holstered handgun. Jurors also convicted Reffitt of obstructing Congress’ joint session to certify the Electoral College vote, interfering with police officers who were guarding the Capitol and threatening his two teenage children if they reported him to law enforcement.

Meanwhile, a jury trial started Tuesday for a former police officer from Virginia who is charged with storming the Capitol with a fellow officer.

A federal prosecutor said former Rocky Mount police officer Thomas Robertson stormed the Capitol because he believed the 2020 presidential election had been stolen from Trump and he wanted to interfere with the certification of the Electoral College vote.

The other former officer, Jacob Fracker, pleaded guilty to a riot-related charge and could be a key witness for prosecutors. Robertson’s trial resumed Wednesday with testimony from a Metropolitan Police Department officer who supervised other officers during the riot.