ALBUQUERQUE, N.M. — Professional sports can now reopen in some capacity under the new red-to-turquoise reopening framework that was announced by the state Wednesday.

The announcement came as exciting news for teams like the Duke City Gladiators, who are hoping to kick off their indoor football season in a few months. Recently, the team also threw its support behind APS student athletes who are hoping to participate in sports.

"For guys like myself and a couple of my teammates, sports saved our lives,” said Daryl Stonum, with the Duke City Gladiators.

Stonum, who grew up in a rough part of Houston, said he wouldn’t be where he is today if not for football.

"It was easy to turn my back on college and sports and take a path down a life of crime. A bad neighborhood, I could’ve done drugs. I could’ve done all types of trouble,” he said.

Stonum said football created all kinds of opportunities for him. He obtained two degrees, has played for the Chiefs in the NFL, and is now the wide receive for the Duke City Gladiators.

"If you have no sports, what are these kids going to do? What are they going to turn to?" Stonum said.

The Gladiators joined the group of APS students, parents and coaches earlier this week for a “Let Them Play” protest outside APS headquarters. However, the Gladiators also have another fight on their hands.

"At league meetings we decided to push the season back as far as we could,” said Gina Thomas, owner of the Duke City Gladiators.

Thomas said the team’s first home game is scheduled for the end of May, and that their hope is to play in front of fans at Tingley Coliseum.

Under the state’s newest red-to-turquoise plan, sports venues can allow 25% indoor capacity when a county has reached level green. In the turquoise level, capacity jumps to 33% indoors.

"We plan to bring those players in, we plan to play in whatever capacity that we can,” Thomas said.

In the meantime, the Gladiators will continue putting pressure on state education leaders to let APS athletes participate in sports. 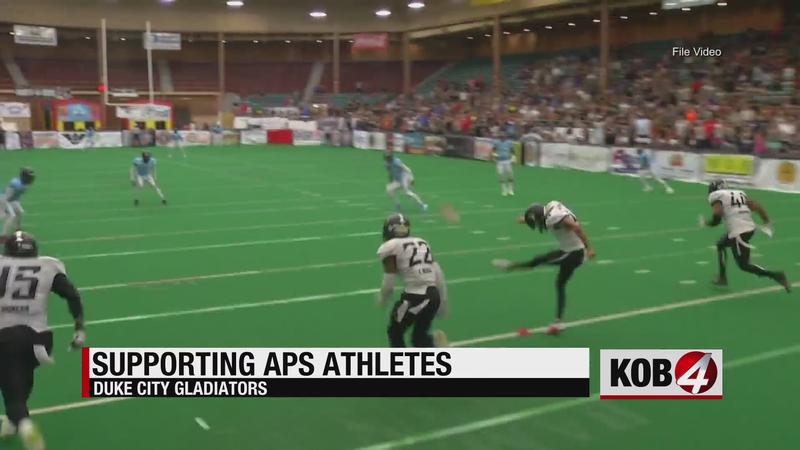