ROSWELL, N.M. – An attempt to limit the governor’s emergency powers, through a proposed state constitutional amendment, was defeated Tuesday.

State Rep. Greg Nilbert, R-Roswell, made a motion to bypass the committee process and instead bring New Mexico House Joint Resolution 3 to the full floor. The motion to bring the proposed constitutional amendment to the floor, however, was defeated 25-43 Tuesday.

It was the latest attempt by Nibert to advance the resolution and spark debate on how much oversight the legislature should have over the emergency power’s authority that Gov. Michelle Lujan Grisham has had during the nearly two-year COVID-19 pandemic.

“We need to have the debate on our constitutional role as a legislative body when it comes to the crafting of public policy and the expenditure of public monies in connection with these extended emergencies. So that’s all I am trying to do is to get that debate to occur,” Nibert said in explaining his motion.

The same motion late last month deadlocked in the House Government, Elections and Indian Affairs Committee on a 4 to 4 vote. A ninth member, state Rep. Doreen Gallegos, D-Las Cruces, was absent from meeting the day of the vote.

House Joint Resolution 3 would send to New Mexico voters a proposed state constitutional amendment that, if approved, would make emergency declarations issued by a governor automatically expire after 90 days.

If the governor wanted to extend that authority after the deadline, the Legislature would have to review the emergency order.

Through a supermajority in both the House and the Senate, such an order could then be amended, modified or suspended. Otherwise, the authority could be renewed for another 60 days.

Like other state legislatures across the country, New Mexico Republicans are working to curb some of the power used by the governor to impose restrictions during the pandemic.

Gov. Lujan Grisham has vocally opposed the measure, saying the executive branch’s flexible power has allowed her to swiftly enact measures that, she says, have saved lives.

Nibert has introduced the same resolution or companion legislation every time the legislature has convened since 2020.

He said the debate goes beyond the pandemic, it’s about the state legislature asserting itself as a co-equal branch of government during such emergencies.

“We need to have the debate on our constitutional role as a legislative body when it comes to the crafting of public policy and the expenditure of public monies in connection with these extended emergencies. So that’s all I am trying to do is to get that debate to occur,” Nibert said.

Others on the floor agreed, saying the debate is one they are eager to have.

“I think we cannot err on such an important issue to so many New Mexicans not to give this resolution further consideration,” state Rep. Phelps Anderson, DTS-Roswell, said.

But most Democrats pushed back against the motion.

State Rep. Georgene Louis, D-Albuquerque, who serves as the chair of the House Government, Elections and Indian Affairs Committee, said the resolution had already received a fair hearing in her committee.

“We took it as every other bill that’s been heard before the committee where we’ve received public comment, we’ve heard discussion from the committee members where they have had an opportunity to debate the bill and that is why I will not be voting in support of this motion,” Louis said.

Nibert acknowledged that bills typically go through the committee process. However, he added he believes the debate on the governor’s emergency powers is important and noted the resolution last year passed that same committee.

State Rep. Daymon Ely, D-Corrales, who co-sponsored HJR 3 when it went before the committee, said while he supports the bill itself, he opposed Nibert’s strategy to skip the committee process and bring the legislation directly to the floor.

He said that he believed doing so undermines the committee process and that Nibert’s assertion that he believes the debate is necessary is not enough reason to bring the resolution straight to the floor.

“If the factors that you have identified “it’s important”, “we really need to have this debate” If that is what we are talking about, then literally every bill eventually bypasses the committee process and comes to the floor. Because all of us have, in our heart of hearts real issues that we think are important and we would like the body to discuss,” Ely said. 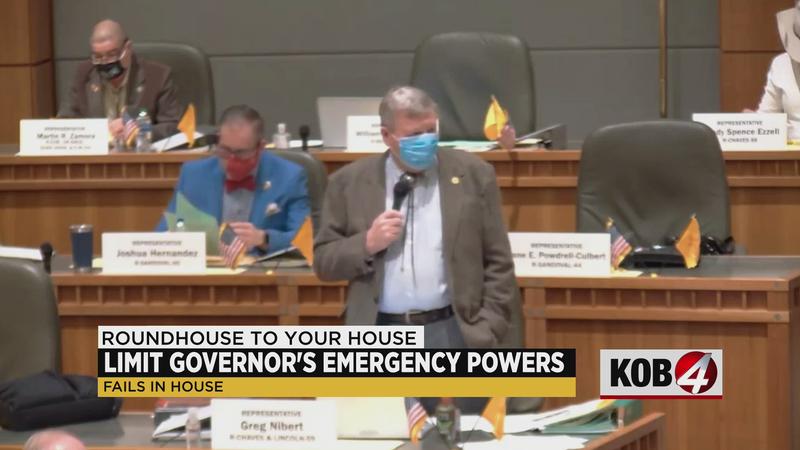