ALBUQUERQUE, N.M. – Members of the National Guard could be filling in as substitute teachers across the state starting this week – but not everyone is on board with this idea.

Many took their concerns to a rally at the Roundhouse, teachers had a list of demands, from raises to better health care. But they said they never asked for the National Guard to step in, so they don’t feel like they are being given the resources they need.

“Every single one of our students deserves a quality education in this state, everyone. And we all know they can’t get that quality education unless they actually have educators who are in the state, does that make sense to people? Well not everyone,” said Becky Pringle, the president of the National Education Association.

When teachers heard National Guard troops could be joining them in the front of the classroom, many didn’t like that idea.

“Theres are a lot of things going on that are driving teachers out. And when you drive teachers out we’re getting the National Guard and different people into the classroom but nobody knows how to teach cause they are not certified to teach,” said Jim Maes, a special education teacher.

Even the president of the New Mexico branch of the American Federation of Teachers told KOB 4 Monday, she had her reservations when she heard this plan.

“I was unhappy with it at first as well. It’s easy to fall into that trap that anyone can come on off the street and trained four years of our life to do and it’s personal, it feels personal. But once I took a step back and looked at it, I don’t view it that way now that I unpacked all those pieces,” said Whitney Holland, AFT New Mexico president.

She explains this plan is not to replace teachers or tell them how to do their job, instead the National Guard will be filling in the gaps.

Not just anyone can come off the street and be a substitute teacher. The process will include at least one background check.

Another concern came from a KOB 4 viewer who said they are a retired teacher, saying:

"We are not paid babysitters. By having the guard step in to fill vacant positions whether from COVID or from diminishing staffing, it is once again reaffirming the state disregard for a quality education for its children."

So what kind of education will students receive? When the National Guard steps in to these classrooms, is it going to be a movie day or will they have lesson plans set forward to them by these teachers?

“In my experience when I was a teacher, I always left probably too much information and I left lesson plans for people to follow and I would assume it would be the same. I’m viewing it and telling my members to view it as the lens of any other substitute whether it’s National Guard, community member or retired teacher, that’s how I would approach this. I believe it’s at the discretion of the educator," Holland said.

According to the Gov. Michelle Lujan Grisham’s office, so far they have 59 volunteers who have completed the training, 46 of those are National Guard and 13 are state employees.

KOB 4 reached out to the largest school district, Albuquerque Public Schools, and a spokesperson said they don’t have any National Guard members in their classrooms right now and they don’t have a timeline for if or when they will be there.

In terms of long-term solutions, Holland told KOB 4 she sat in on the education committee Monday morning and three bills – a teacher residency program, retirees returning-to-work legislation, and the 80/20 health care bill – all passed unanimously. She is encouraged that teachers will get what they are asking for by the end of the session. 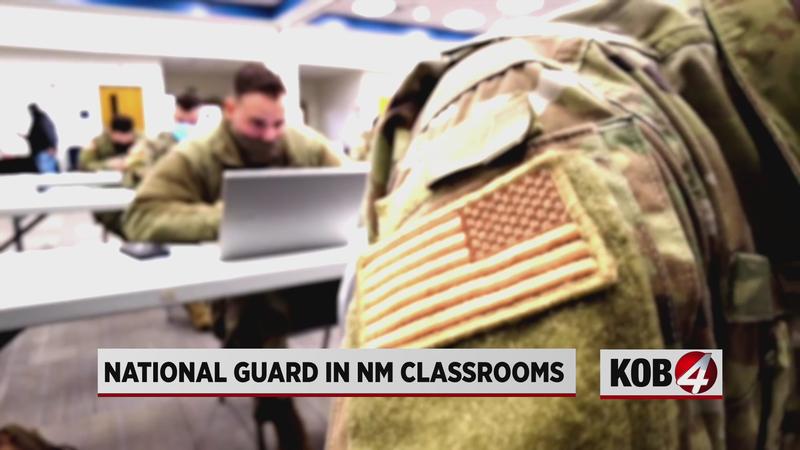