ALBUQUERQUE, N.M. – The Tularosa Basin Downwinders Consortium is seeking help for victims who have been dealing with health effects from the Trinity test.

The Radiation Exposure Compensation Act (RECA) that compensates radiation exposure victims will hit the floor for the eleventh time, and it could be the last chance for the local group to get compensated.

"The names keep adding up. We add more names every year. I haven’t counted the names this year, but there’s 22 pages of names that are on the list," said Tina Cordova, co-founder of the Tularosa Basin Downwinders Consortium.

On July 16, 1945, the world’s first atomic bomb testing took place in what is now the White Sands Missile Range. It was part of the top secret Manhattan Project, with operation code name “Trinity.”

"As you well know, everything that goes up has to eventually come down. And it did come down. It rained down as radioactive for ash for days in the communities that surround Trinity," said Cordova. 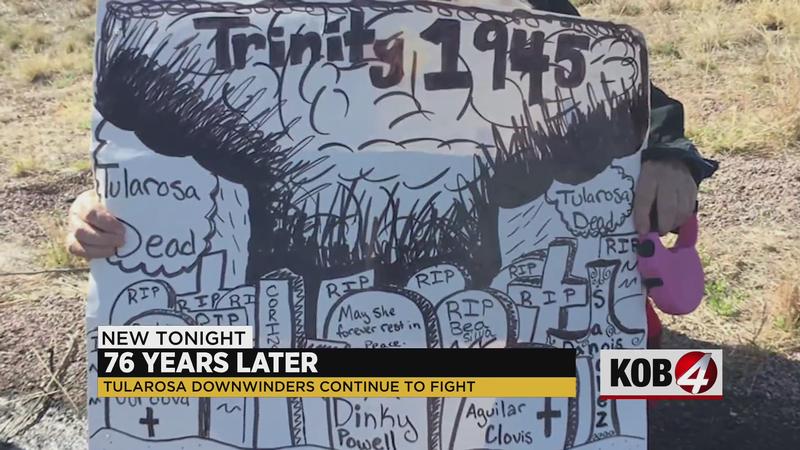 Cordova said the radioactive fallout has followed generations of families to their graves, including hers.

"In my own family, I’m the fourth generation in my family to have cancer since 1945, so I worry extensively about my son and my grandsons," she said.

Cordova was diagnosed with thyroid cancer a few years back, and she said it’s a similar story for folks whose families were around for the blast.

"It’s the cancers involving the lungs, the breasts, the stomach, the intestines. Cancers like leukemia," she said.

Cordova said the federal government claims the bomb testing site was in a remote and uninhabited area.

"We firmly believe that there’s always been an over-glorification of the science and industry, and no attention paid to the people who were literally sacrificed as part of the process," she said.

The group asked the federal government for two things: to be included in an existing bill, RECA, that compensates victims, and they want the amount of money people are getting to increase.

"The bills, if they’re introduced this year, we basically have one year to make sure that the bill is passed because the original bill or law, will sunset in July of ’22," Cordova said.

Cordova is asking New Mexicans to reach out to elected representatives for help — and she will continue to do the same.

The group hopes to find out the results next week.