ALBUQUERQUE, N.M. – There’s been a lot of focus on Albuquerque’s crime crisis as the city set a new homicide record in 2021. But the problem of violent crime is a statewide issue.

As this legislative session moves along, advocates and leaders are working to convince legislators who don’t live in the metro of that very fact.

“Too many individuals are being released, when they should be held. And those individuals are committing crimes that are contributing to the ongoing problem, and they know it, they know they can be released. And that makes Albuquerque an attractive place to commit crime.

On the first day of the session, state leaders tried to fend off rhetoric like this that makes it seem like it’s only Albuquerque in a violent crime wave. Gov. Michelle Lujan Grisham mentioned it directly in the State of the State address.

“I don’t accept the argument that this is an issue in only one part of our state. I don’t accept that any decision-maker in this building would say that somehow this isn’t their problem. We all have a role to play in keeping New Mexico safe,” said Lujan Grisham.

Her comments come after Sen. Joseph Cervantes was quoted in the Albuquerque Journal over the weekend.

"It’s a problem that Albuquerque has largely created for itself. It’s not really about changing state law," said Cervantes.

Cervantes indicated he’s skeptical about creating new tough on crime laws because the laws would apply statewide. He believes the metro is the real problem. But many of his fellow Democratic lawmakers disagree with that notion.

In a live interview with KOB 4’s Tessa Mentus, Speaker of the House Brian Egolf echoed the governor’s sentiments of a statewide problem.

“I think I speak for a vast majority of Democrats in the legislature – we acknowledge there is a crime crisis," Egolf said. "It is a crisis of public safety in Albuquerque, but it is not just there. In terms of per capita, the 1st Judicial District, which is Santa Fe, Los Alamos and Rio Arriba Counties, has more violent crime than in Albuquerque. We’re smaller and people don’t see it as much or hear about it as much. It is statewide. This notion that it is an Albuquerque problem, I think it is a false notion."

According to recent FBI crime statistics, New Mexico has the second-highest violent crime rate in the nation, only surpassing Alaska. 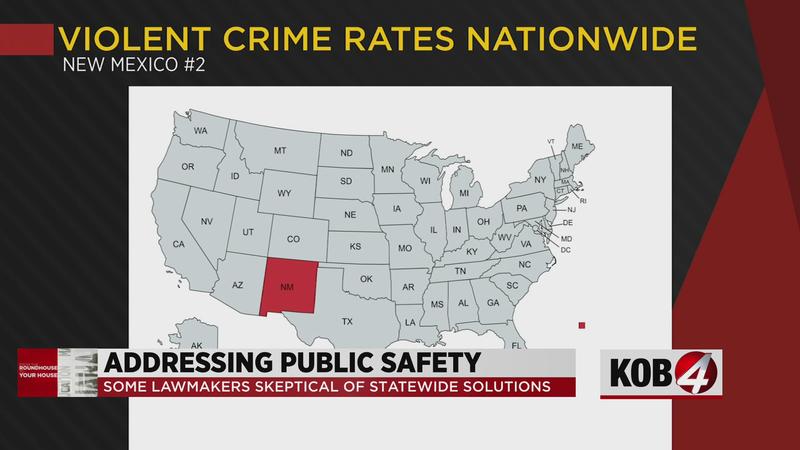