ALBUQUERQUE, N.M. – More than a year after the deadly shooting of basketball standout 18-year-old JB White at a Santa Fe house party, his alleged killer is finally having his day in court. Estevan Montoya, now 18-years-old, is accused of pulling the trigger.

On Wednesday, opening statements and witness testimonies paint very different pictures of what happened in the early morning of July 29, 2020.

"I want you to pay attention to the evidence. Pay attention to our evidence. And when we come to the very end, it’s not quite as vicious as the state would like you to think it is," said Dan Marlowe, defense attorney.

There were some things both sides agreed on in court Wednesday: what was supposed to be a small high school party, quickly grew out of control. There was a lot of underage drinking and then a brief fight broke out on the porch between two other teens. All this happened shortly before the shooting.

One witness says she started filming it on Snapchat, but was not expecting to capture what happened next. It took 18 terrifying seconds between the first gunshot that killed White and a second shot–fired back toward the porch, that did not hit anyone.

Even the defense said evidence will show that Montoya, who was only 16-years-old at the time, pulled the trigger.

The defense claims White was chasing Montoya and Montoya fired a random shot over his shoulder while running away in fear for his life, but did not mean to kill White.

"He may have been backpedaling, but he was not running away," said Padgett-Macias.

"There was a desperate shot, a panic shot," said Marlowe. “It was a bad bad deal, it was a tragic deal, but it wasn’t a crime."

Over the next several days, a jury will determine whether or not Montoya is guilty of shooting and killing the stand-out basketball star who was set to play with the UNM Lobos just a couple of weeks later. 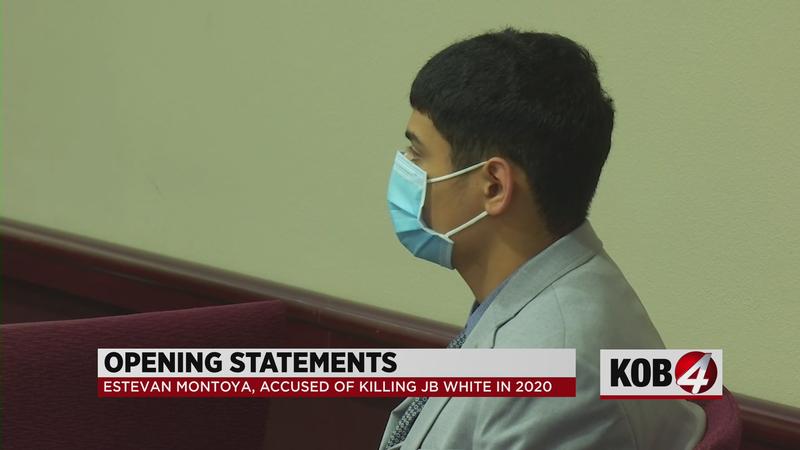