SANTA FE, N.M. This week’s Pay it 4ward involves a retired police officer who has come up with an eye-catching way to honor veterans in Santa Fe.

Drive on Cerrillos Road in Santa Fe between Airport Road and the interstate – and you can’t miss them. Dozens of banners and flags on light poles lining the road – honoring veterans and their service to the country.

"The banners are up from Memorial Day to Veterans Day and then they take them down,” said Jeff Dieringer, Pay it 4ward nominator.

Three years ago the City of Santa Fe became the first city in the state to take part in the Hometown Heroes Program, recognizing veterans with banners.

“The first thing we found out that the city had a ban on banners, so we had to go to city council meetings, subcommittee hearings and get that passed,” said Dieringer.

Dieringer is also a retired Santa Fe police officer and friend of Christy’s he even nominated Christy for this week’s Pay It 4ward.

"So I thought it’d be nice to have to have him recognized for all the work he’s put into it and everything as well," Dieringer said.

KOB 4 met Dieringer outside the Santa Fe Police Department’s headquarters to surprise Christy, who thought we were just there to do a story about the banners.

“Don, all the hours that you have donated to this great program and your own money. That just says a lot about your background and how you feel about veterans and stuff, so on behalf of the family members that have the banners up, their families, KOB 4 and the Jennifer Riordan Foundation, I present you $400,” Dieringer said.

“Well, thank you very much, this will go to the banner program,” said Christy.

Christy said both his father and brother served in the military, and he started the Hometown Heroes Program in Santa Fe as a way to honor their service – and all the other local veterans who served — and sacrificed so much — our country.

"It’s an honor and a privilege to do this for the veterans of the city of Santa Fe,” said Christy.

It started with just 20 banners three years ago, and it has grown to more than 200 today. The program has become so successful – there’s now a waiting list of more than 100.

Christy said he hopes to expand the program to even more roads in Santa Fe.

"I’m going to look straight at the city council right now and say that we need to approve some more poles from Airport Road to St. Michael’s so we can continue this program as it comes into the City of Santa Fe.”

Honoring veterans – one banner at a time. 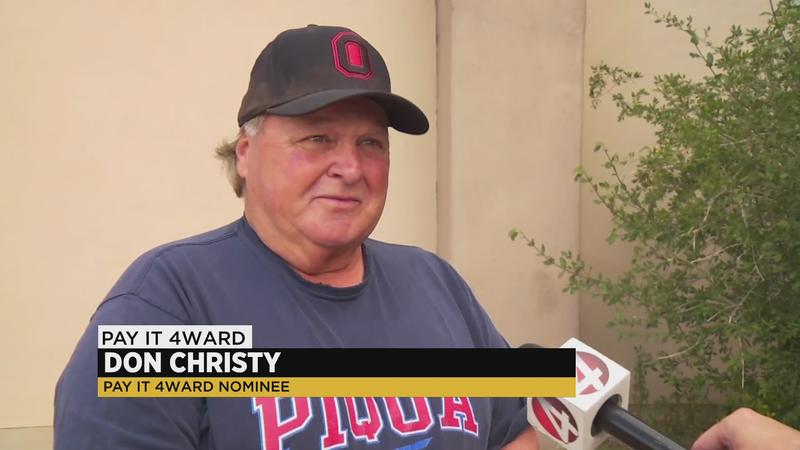