RIO RANCHO,N.M. – A selfless great-grandmother who volunteers her time at a hospital during the pandemic has not gone unnoticed.

They are the first two faces you might see as you walk into the Rust Medical Center and they don’t get paid a cent.

Jean Welch has volunteered since the place opened a decade ago. And during that time she’s worked alongside Liz Martinez.

“We came back from COVID and we take a lot of stuff from that front desk. People are angry because they have to wear the mask, they have to get their temperatures taken,” said Martinez.

If the abuse wasn’t enough reason to show some appreciation – Martinez has seen
Welch go above and beyond – like the other week, she helped someone fill a prescription.

"He had no clue what to do, you know, he was an elderly gentleman and she helped and got what he needed done,” Martinez said.

Which is why she’s Paying It Forward and surprised Welch in the middle of her shift working the front desk.

“For one of the best friends anybody could have. That’s where I was. Thank you, thank you so much,” said Martinez.

Welch is appreciated by everyone, from by her fellow volunteers – to the hospital’s CEO.

"It’s heartwarming to see that – that same sense of team and same sense of family that we had pre-COVID,” said Angela Ward, Rust Hospital CEO.

Welch sports many pins – signifying her hours of service.

“4,000 hours is a tremendous amount of personal time to devote to this – really – work of love,” said Ward.

Why does Welch give so much of her own time?

"It’s heartwarming, I wanted to give back, I’ve worked all my life and raised my children, my husband died 9 years ago, actually, within a few days. And it’s just something I can do."

"I invested with a gentleman, who was a family friend actually, and – in August I was told he took all of our money,” Welch said.

She said her life-savings was wiped out.

Still – she counts herself as blessed, she has another great-grandson on the way – and a community that loves her. 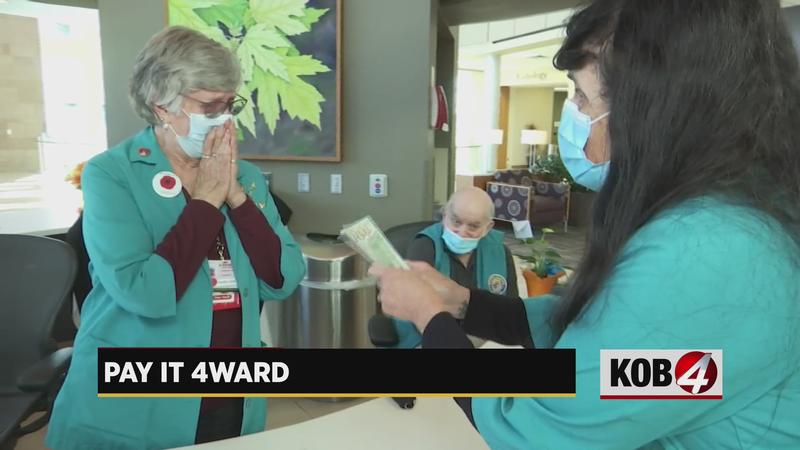