ALBUQUERQUE, N.M. – More details have been released about a man who stabbed three people on the Rail Runner Saturday, then fleeing down the tracks.

Police have arrested Luis Sanchez and, according to his criminal complaint, he was causing even more trouble in custody.

The criminal complaint details what happened on the Rail Runner Saturday, it said Sanchez got into a fight with another passenger, then stabbed him in the back. A security guard tried to break up the fight and she was stabbed in the neck– and another woman was stabbed in the shoulder as Sanchez was trying to flee from the train. The knife Sanchez is accused of using to stab multiple people was left on the platform of the Montano Rail Runner station as police were investigating.

“We have never had an incident like this, a physical altercation on the Rail Runner, in the 16 years we have been running. Things have happened at the stations on the platforms not a lot very few but this was a first for us and we are grateful to our passengers who remained calm and for the security on every train,” said Augusta Meyers Rail Runner spokesperson.

According to the criminal complaint, Sanchez ran off the train and down the tracks – a police helicopter was able to find him and when officers arrived, Sanchez threw a backpack over a fence before he was arrested. Police were able to find the backpack –it was covered in blood and inside they found a loaded handgun with a round in the chamber and blood on the side and handle of the gun.

All three victims have been taken to the hospital. But this situation could have been a whole lot worse if it wasn’t for the quick action of the passengers who rendered first aid to the victims on the train.

“Someone asked for anyone who was a nurse or medical, so I ran to the person who got stabbed and held pressure where I needed to,” said the nurse who asked to remain nameless.

She stayed with the woman until medics arrived.

After Sanchez was arrested, he was taken to the hospital and treated for cuts on his hands. But in custody, he apparently couldn’t keep his hands to himself. When an officer attempted to unhandcuff Sanchez to interview him, Sanchez allegedly tried to grab that officer’s gun – he was then handcuffed to the bench for the rest of the interview.

Then, when they were getting ready to transport Sanchez, court documents say he attempted to take another officer’s hand gun– he was restrained by multiple officers after that.

This wasn’t Sanchez’s first run in with the law, his criminal history goes back to 2007 and includes multiple felonies like stealing cars and burglarizing homes.

Sanchez is expected in court this week. 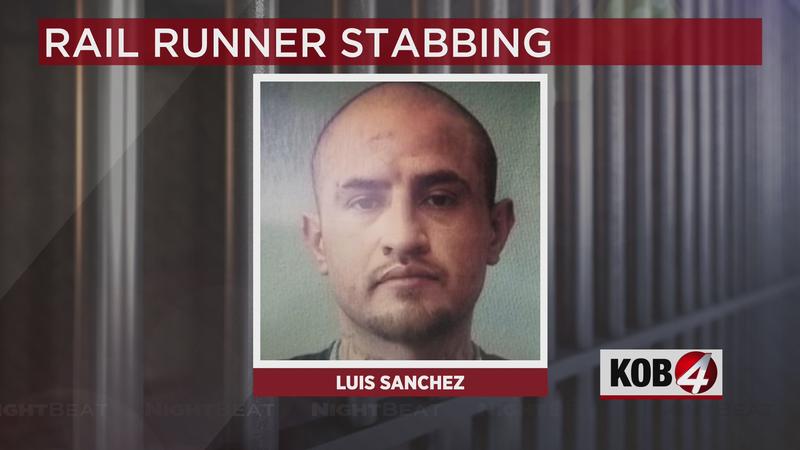