ALBUQUERQUE, N.M. – There is already a lot of focus on the upcoming midterm elections, and New Mexicans will also be voting on the next governor. But it appears there are questions about whether some stops on the campaign trail in the state are even legal.

"It’s not a small thing, there are quite a few people here, the parking lot is full,” said Cindy Runyon president of the Rio Grande Federation for Republican Women.

There is a lot at stake in New Mexico’s next gubernatorial election this November.

“So crime and homelessness and taxes and the economy and that marijuana law and assisted suicide things that have been talking about round us,” said Runyon.

All those topics came up Tuesday night at Calvary Chapel in Belen during a forum among candidates running for the Republican nomination for governor.

“They are free, a lot of the time they are very welcoming, they want the community to come in and listen and hear what the candidates want to say,” Runyon said.

But some New Mexicans have questioned if it’s even legal for these political events to happen at churches and other nonprofits.

“If a church is going to be used for individuals to explain where they stand on the issues that doesn’t quite violate 501c3 if the church endorses a candidate then that violates 501c3,” said Kastenberg.

While multiple candidates participated in the forum at Calvary Chapel, the church itself didn’t endorse or support any candidates.

“No this is a community event so they can come in and hear the candidates speak,” said Runyon.

Officials say it was just a venue – and the event was hosted by the Rio Grande Federation for Republican Women.

“So words matter and actions matter but holding a debate where you don’t back a candidate and it’s just an open forum for people to ask questions that does not violate 501c3,” said Kastenberg.

Kastenberg adds even if this forum was a violation of 501c3 law it’s unlikely any legal action would be taken– but it is possible — the place of worship could lose its tax-exempt status if it is found in violation. 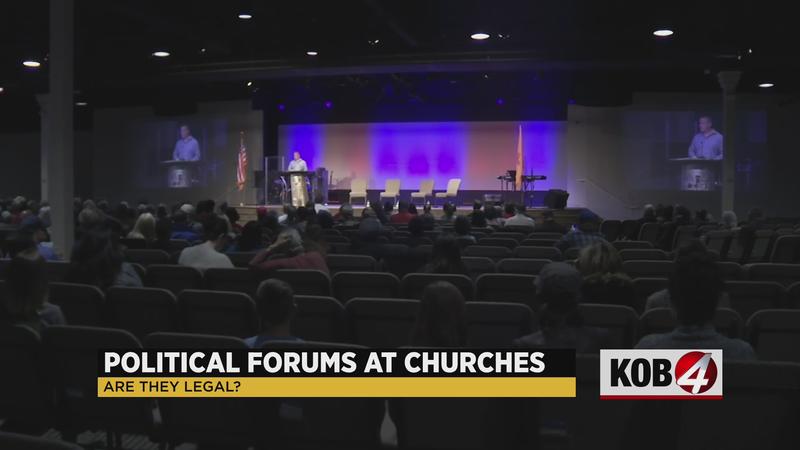