SANTA FE, N.M. — The woman who claimed to be kidnapped in Santa Fe Wednesday is now suspected of lying. A search warrant reveals there might not be a kidnapper after all.

Police initially told KOB 4 that a man kidnapped a woman, leading police on a high-speed chase on I-25 that ended in a crash that killed Robert Duran, a Santa Fe police officer, and Frank Lovato, a retired Las Vegas firefighter.

The woman, Jeannine Jaramillo, is not facing any charges, but police believe she could be the driver who caused the deadly crash. Newly-obtained search warrants show that Jaramillo was reportedly the only one in the vehicle following the deadly crash on I-25. After hours and hours of searching, police did not find the suspected kidnapper.

Jaramillo was accused of a very similar crime in Grants just a few months ago. In more than 10 alleged incidents, charges against Jaramillo never stuck. She mostly got probation and appears to have spent a few months in jail, according to court records.

Before this week, police said Jaramillo had already lied twice about a boyfriend of hers being involved in crimes. Officers said she led them on a dangerous high-speed chase in Cibola County in September – one strikingly similar to Wednesday’s chase. 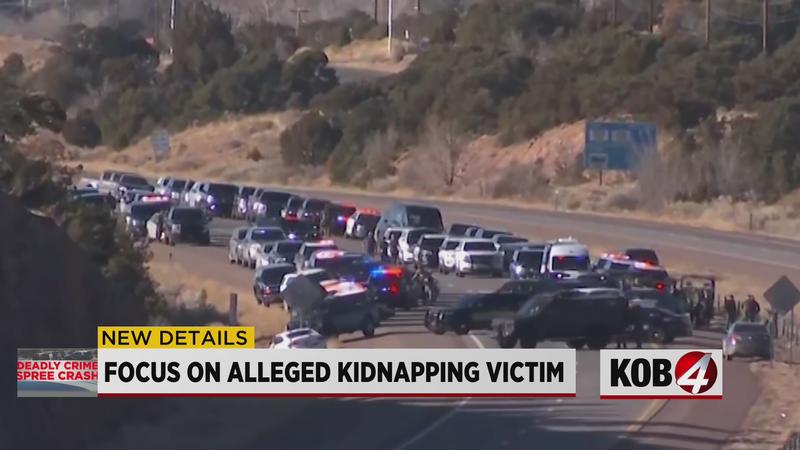 In court documents, deputies wrote that she was running red lights, almost causing a crash multiple times and driving into oncoming traffic. When they later found her at a house, she said her boyfriend whose last name was “Tafoya” forced her to do it, saying he “held a knife to her neck” from the floorboard. Deputies said there was no one else in that stolen car, but they did find meth. The charges were dismissed.

According to court documents, in October, Cibola County deputies said they found Jaramillo near a stolen utility bucket truck that was in a ditch off I-40. She also said she was with her boyfriend, but officers searched and never found anyone else, saying, “the events from this case are the same as the last stolen motor vehicle from the area.” The charges were dismissed once again.

Jaramillo has had other run-ins with law enforcement. In 2015, she was accused of trying to hit an officer with a stolen car in Bernalillo County.

“This is an active and ongoing investigation, the New Mexico State Police Investigations Bureau is still actively working on identifying and locating a male suspect who was involved in this incident. There have been no arrests made at this time. When more information becomes available we will send out an update.”