ALBUQUERQUE, N.M. – Twenty-one Ten3 employees were rescued after being trapped on the Sandia Peak tramway since 9:30 p.m. Friday night.

While the employees did have blankets and each other to huddle, it was still a chilly night on the mountain. Friends and family members camped out in the parking lot overnight, anxious to see how it panned out.

Alex Garcia has been waiting to pick up her boyfriend from his shift at Ten3 since 9 p.m. last night — more than 15 hours later. She finally saw him — stepping out of a helicopter — back on solid ground.

“I was kinda worried he wasn’t going to get down because of the e-cable and how high it was and everything,” said Garcia.

There were many other excited greetings earlier in the afternoon as trip after trip more folks were brought home from their long cold night trapped on the tram.

The problems started Friday evening as a winter stormed rolled into the metro.

“We have an elbow that reads the wind on our towers and we try not to go over 7. 7 is a number we don’t really like and when we were in the 5’s we decided we needed to start getting customers down,” said Drajon Jones, Sandia Peak Tramway employee.

So they started to clear folks off the peak earlier than usual.

“We got all the guest out nice and safe, but it just left the employees,” said Jones.

Ten3 employees take the tram down after work every day and every once in a while, they hit a hiccup.

“I’ve been here for 2 years we’ve been stuck once or twice due to some weather, and you just wait 15-20 min but that 15 min turned into a half-hour, the half-hour turned into an hour and the conversations came. Then we heard about the ice and we had to dock at one of the towers,” said Bill Howly, Ten3 general manager.

They ended up docking on the tower overnight and into the new year. Rescue crews from multiple agencies were called and helicopters took to the air to assess the best way to get the folks to safety. And in the end, they repelled down from the tram.

“At first we were wondering if we were hiking out and there was some grumpiness about that but we were still happy. We would be getting out, but as soon as we heard helicopter and repelling, we were like ok bucket list, bucket list,” said Howly.

In surprisingly good spirits, every employee was checked out by EMS on scene, and no injuries were reported.

It was pretty crammed in the tram, but these trams are prepared for this exact situation – there is an emergency kit full of blankets, sleeping bags, and food. There is even a space where they could go to the bathroom.

Those supplies lasted them through the night, and in the morning – before rescue teams could get the people down. The teams were able to bring them water, hand warmers and more clothes and shoes. Eventually, everyone was rescued safely. 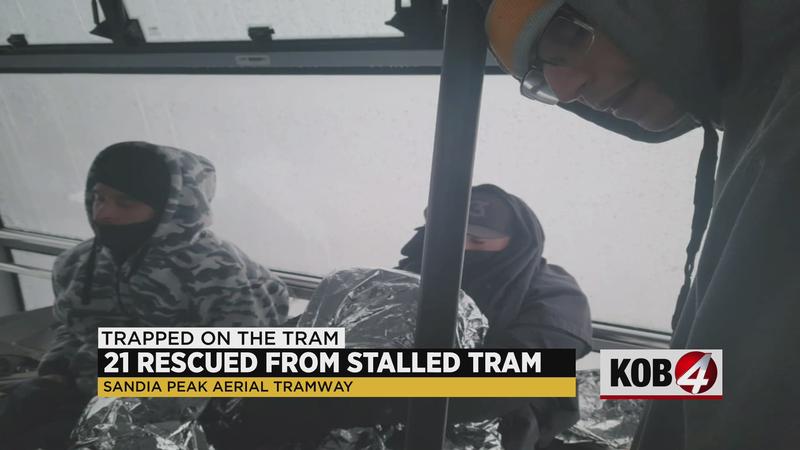