ALBUQUERQUE, N.M. – Hydrogen is quickly becoming the next big player in green energy and New Mexico leaders want to make sure the state is part of the foundation.

“We have a chance to be first, and New Mexico being first is something that we’re good at in this administration,” said New Mexico Environment Secretary James Kenney.

The new bill offers tax incentives for companies willing to construct more hydrogen-production facilities in New Mexico. This comes after the Biden administration earmarked $8 billion to develop 4 hydrogen hubs across the country.

So what’s the big deal about hydrogen?

Climate advocates say the element can be used as a fuel source, similar to coal and natural gas, but it doesn’t emit the same harmful, greenhouse gasses.

Advocates admit hydrogen is not as efficient as traditional renewable resources like wind, solar, and geothermal. However, hydrogen will be crucial to decarbonize certain sectors that currently rely on fossil fuels.

"They are things like steel manufacturing, and ocean shipping, where, you know, batteries probably would not work very effectively for, you know, a big freighter vessel," said Solomon.

Advocates say there are major environmental concerns with how hydrogen is produced.

"In order to make hydrogen, you have to invest a lot of work into prying off the hydrogen atoms from where they come from. And primarily, that is, from fossil fuels or methane” said Solomon.

He says 98% of hydrogen produced today is derived from natural gas. The energy-intensive process rips away the hydrogen atoms leaving carbon dioxide as a byproduct.

Solomon says the increased demand for natural gas because of hydrogen production can lead to more methane emissions from fracking.

"There are now two scientific papers that have been published in peer reviewed science journals that say that producing hydrogen from fossil fuels is really 20% worse for the climate that just directly burning natural gas and releasing the emissions directly,” he says.

There is a process to create so-called “green hydrogen” by running an electric current through water.

Solomon says that the process still requires a lot of electricity and water.

“We [New Mexico] have lots of lots of solar energy, we have lots and lots of wind energy, we don’t have that much water. And I think we should take advantage of the resources that we do have” he said.

State leaders said they are committed to sticking to their goal of net-zero greenhouse gas emissions by 2050, but say the hydrogen industry is moving forward with or without New Mexico.

New Mexico has already started building its hydrogen infrastructure. BayoTech opened its first production facility in northeast Albuquerque in late 2021 and already has plans to build more across the state.

There are also plans to convert the retired Escalante power plant near Prewitt, New Mexico from a coal-powered facility into a hydrogen power plant. 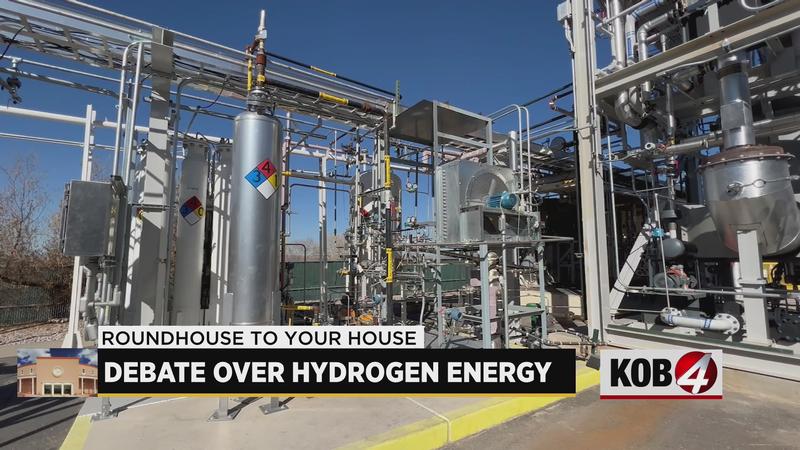