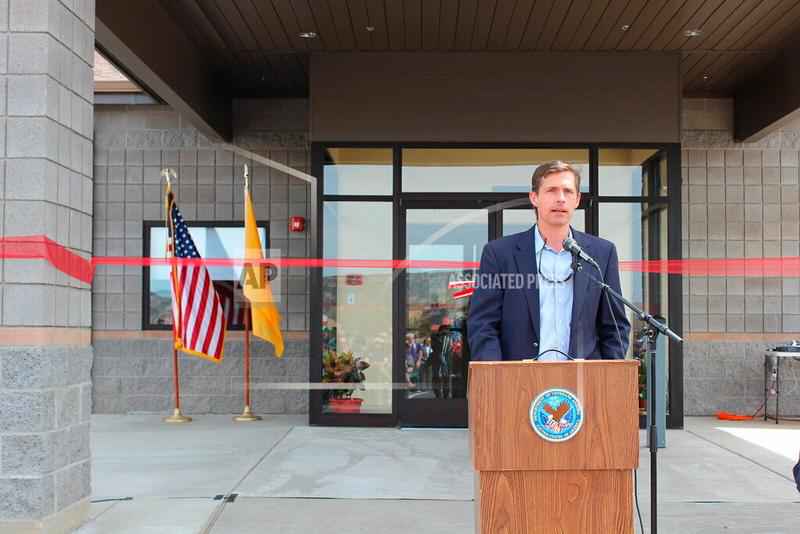 FILE - Sen. Martin Heinrich speaks at the grand opening ceremony for a community-based outpatient clinic managed by the U.S. Department of Veterans Affairs in Raton, N.M., April 25, 2014. Heinrich said Monday, March 14, 2022, he will fight to keep the clinic and others in New Mexico from closing as proposed by the VA as part of a modernization effort. (Whitney Potter, Office of U.S. Sen. Martin Heinrich via AP, File)

ALBUQUERQUE, N.M. (AP) — The U.S. Department of Veterans Affairs has released a list of community-based clinics that it proposes to close in New Mexico and other rural areas around the country as part of a years-long process aimed at modernizing the department and streamlining its infrastructure.

Some members of Congress vowed immediate opposition Monday, saying the clinics provide the only access to care for thousands of veterans.

U.S. Sen. Martin Heinrich, D-New Mexico, said the analysis done by the VA has flaws, including that it was based on data collected before the coronavirus pandemic put a strain on health care systems in New Mexico and elsewhere. He said many providers have disappeared over the last years, leaving a void.

There are four clinics in New Mexico that are on the list, with three of them serving predominantly Native American and Hispanic populations in areas that are typically underserved. They are in Gallup, Las Vegas, Española and Raton.

“I have no intention of seeing these four clinics close. They’re just too damn important to veterans in New Mexico,” Heinrich said during an interview.

Heinrich spoke with Secretary of Veterans Affairs Denis McDonough on Monday, while Rep. Teresa Leger Fernández fired off a letter to the secretary in an effort to make their case early in what will be a multi-year process.

The recommendations will be considered by a special commission that is being nominated now. The commission will conduct public hearings as part of its review before submitting its own recommendations to the president for consideration in 2023.

In visiting with constituents from rural New Mexico, Leger Fernández said she has heard how hard it is to get care.

“The commission clearly fails to understand that in our rural areas targeted for closures, there are insufficient health care providers in the community,” she said. “Even more troubling is that these recommendations contradict the VA’s own findings from the local veteran stakeholder listening sessions it conducted as part of the report. This appears to say that the VA listened, but didn’t hear.”

Regional VA officials briefed state officials ahead of the release of the report, saying the document recommends closing VA facilities in areas of the country with declining populations or usage. That includes in the Northeast, Midwest, and parts of the rural West.

In New Hampshire, Democratic Rep. Annie Kuster said her state is the only one in the country without a full-service VA hospital, which creates unique challenges in access to care for veterans there. She pointed to treacherous driving conditions and long commutes particularly during the winter months.

“More than 10% of the New Hampshire population is made up of veterans,” she wrote to McDonough. “We owe the men and women who have served our nation in uniform a tremendous debt of gratitude. Their service and sacrifice must be met with our commitment to ensure that every veteran is able to access the care and support they need.”

McDonough said in a statement posted on the VA’s website that the agency came to the recommendations by asking what would be best for veterans. He added that the agency spent several weeks talking with VA employees, unions, state partners, veteran service organizations and members of Congress.

Regional VA officials said the recommendations in the report are open for debate.