By MATT O'BRIEN and RAF CASERT The Associated Press

An employee tests a version of Call of Duty on Friday, Oct. 21, 2022, at Activision Blizzard, Infinity Ward Division, in Woodland Hills, Calif. Call of Duty has been one of the best-selling video games for the past decade-plus, and is at the heart of the developing antitrust fight over whether Microsoft will be able to acquire Activision Blizzard. (AP Photo/Allison Dinner)[ASSOCIATED PRESS/Allison Dinner]

Microsoft, maker of the Xbox gaming system, first announced the agreement to buy the California-based game publisher in January, but it still awaits scrutiny by antitrust regulators in the U.S., Europe and elsewhere. If it goes through, the all-cash deal would be the largest in the history of the tech industry.

Members of the European Commission, the 27-nation bloc’s executive arm, said in a statement Tuesday that “the point is to ensure that the gaming ecosystem remains vibrant to the benefit of users in a sector that is evolving at a fast pace.”

“We must ensure that opportunities remain for future and existing distributors of PC and console video games, as well as for rival suppliers of PC operating systems,” the commissioners said. They have until March 23, 2023, to decide whether to approve the deal.

At the heart of the dispute is who gets to control future releases of Activision Blizzard’s most popular games, especially the first-person military shooter franchise Call of Duty. Activision this week said its latest installment, Call of Duty: Modern Warfare 2, has already made more than $1 billion in sales since its Oct. 28 launch.

A Call of Duty character hangs on the wall in a stairwell on Friday, Oct. 21, 2022, at Activision Blizzard, Infinity Ward Division, in Woodland Hills, Calif. The release of Call of Duty: Modern Warfare 2 continues a nearly two-decade run for California-based Activision Blizzard's wildly popular military shooting game franchise. New installments of the game can rival Hollywood's biggest blockbusters in how much they earn on their opening weekend. But the battle this time is also happening off-screen as Call of Duty is at the center of a corporate tug-of-war between Microsoft’s Xbox and Sony’s PlayStation over Microsoft's pending $69 billion purchase of Activision Blizzard.(AP Photo/Allison Dinner) 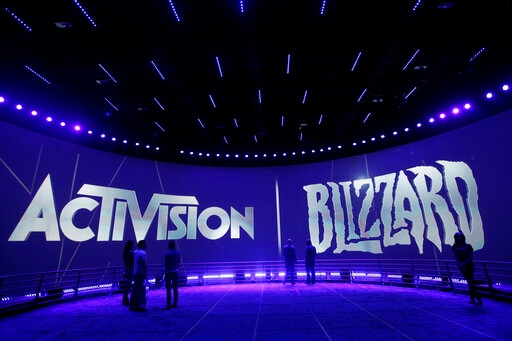 Microsoft’s console rival Sony, maker of the PlayStation, has brought its concerns about losing access to what it describes as a “must-have” game title to regulators around the world. In response, Microsoft has promised to keep Call of Duty on the PlayStation “for at least several more years” beyond its current contract with Sony. It also has said it might bring it to Nintendo’s Switch console, where the game isn’t currently available.

In a preliminary probe, the EU found potential antitrust issues with the distribution of video games and halting access to Microsoft’s rivals. The bloc said it has concerns that the proposed acquisition could hurt competitors to Microsoft’s Windows operating system, because computers without Windows might not be able to get Xbox’s game-streaming subscription service and growing collection of titles.

Microsoft said it will keep working with the European Commission on next steps “and to address any valid marketplace concerns.”

“Sony, as the industry leader, says it is worried about Call of Duty, but we’ve said we are committed to making the same game available on the same day on both Xbox and PlayStation,” Microsoft said in a statement Tuesday. “We want people to have more access to games, not less.”

Activision Blizzard CEO Bobby Kotick said in an email to employees Tuesday that global competition in the video game industry makes it “understandable that regulators are trying to better understand the games business.” But he said the “process is moving along as we expected” and foresees the deal closing by June.

“We will continue to cooperate with the European Commission where, in the countries they represent, we have many employees,” Kotick wrote.

He highlighted Brazil’s recent approval, saying the country’s competition authority understood “we operate in a highly dynamic and competitive industry, and that the merger will not harm competition in any way.”

Saudi Arabia also has signed off on the deal, but it still awaits important decisions from the U.S. Federal Trade Commission and authorities in the U.K. and EU.

Tuesday’s decision was another example of how the EU has led the way on regulating Big Tech companies, opening antitrust investigations, enacting strict regulations on data privacy and pushing through landmark rules that threaten online platforms with billions in fines unless they respect fair market conditions and crack down on harmful content like hate speech and disinformation.

It’s possible regulators could impose conditions on the gaming deal that force Microsoft to keep access open to Call of Duty for longer and ensure that its rivals aren’t getting a lesser version.

Among those listening to Sony’s concerns are antitrust regulators in the United Kingdom. Last month, they escalated their investigation into whether Microsoft could make Call of Duty and other titles exclusive to its Xbox platform or “otherwise degrade its rivals’ access” by delaying releases or imposing licensing price increases.

“These titles require thousands of game developers and several years to complete, and there are very few other games of similar caliber or popularity,” according to a September report from the U.K.’s Competition and Markets Authority.