Retail sales up 0.3% in Aug. from July amid inflation

By ANNE D'INNOCENZIO The Associated Press

NEW YORK (AP) — Americans picked up their spending a bit in August from July even as surging inflation on household necessities like rent and food took a toll on family budgets.

While the report showed shoppers’ resilience, the figures also are not adjusted for inflation unlike many other government reports. In fact, sales at grocery stores rose 0.5% , helped by rising prices in food.

There was, however, weakening in some areas of discretionary spending with Americans fully aware of inflation’s bite. Business at restaurants ticked up 1.1%, but the pace has slowed. Sales at furniture stores fell 1.3%. Online sales fell 0.7% last month after Amazon’s Prime Day boosted e-commerce sales in July. 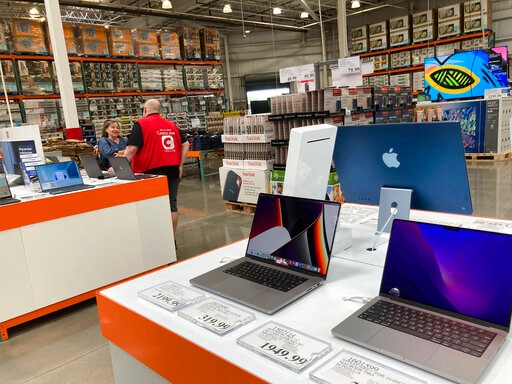 A sales associate helps a prospective customer as laptops sit on display in a Costco warehouse, Aug. 15, 2022, in Sheridn, Colo. Americans picked up their spending a bit in August from July even as surging inflation on household necessities like rent and food take a toll on household budgets. The U.S. retail sales rose an unexpected 0.3% last month, from being down 0.4% in July, the Commerce Department said Thursday., Sept. 15, 2022. (AP Photo/David Zalubowski)

“Retailers would probably like to be growing more, especially relative to inflation, but I’m not sure they could realistically hope for much more,” said Ted Rossman, senior industry analyst at Bankrate.com. “Consumer spending habits are changing as the pandemic continues to recede and inflation remains high.”

Consumer spending accounts for nearly 70% of U.S. economic activity and Americans have remained mostly resilient even with inflation near four-decade highs. Yet surging prices for everything from mortgages to milk have upped the anxiety level. Overall spending has slowed and shifted increasingly toward necessities like food, while spending on electronics, furniture, new clothes and other non-necessities has faded.

On Thursday, it appeared that the U.S. dodged a national freight rail strike, which could have sent retail prices higher.

Still, inflation remains stubbornly high. Lower gas costs slowed U.S. inflation for a second straight month in August, but most other prices across the economy kept going up — evidence that inflation remains a heavy load for American households.

Consumer prices rose 8.3% from a year earlier and 0.1% from July. But the jump in “core” prices, which exclude volatile food and energy costs, was especially worrisome. It outpaced expectations and sparked fear that the Federal Reserve will increase interest rates more aggressively and raise the risk of a recession.

Retailers are wrapping up what has turned out to be a decent back-to-school shopping season. But many retail executives say that customers are being more selective when they buy, a trend that could hold through the only shopping period that tops back to school in sales, the weeks leading up to winter holidays.

Jill Renslow, executive vice president of business development and marketing at Mall of America in Bloomington, Minnesota, said that mall is faring well with families generously spending for the back-to-school season. But she said the lower income Americans are tightening their belts and waiting for sales.

“They’re being more selective in where they are shopping and what they are purchasing, what they’re spending their time on,” she said.

Shoe Carnival, which has stores located in strip malls rather than enclosed malls, did well during the pandemic as Americans avoided being indoors as much as possible. CEO Mark Worden said the chain is now getting another bump as people trade down to lower price footwear amid soaring inflation.

Shoppers are buying fewer shoes this year compared with the last year when business was boosted by the government stimulus checks. But customers are still buying more shoes than in the pre-pandemic 2019.

The government’s monthly report on retail sales covers about a third of all consumer purchases and doesn’t include spending on most services, ranging from plane fares and apartment rents to movie tickets and doctor visits. In recent months, Americans have been shifting their purchases away from physical goods and more toward travel, hotel stays and plane trips as the threat of the virus fades.