By SUSAN HAIGH and LISA MASCARO The Associated Press 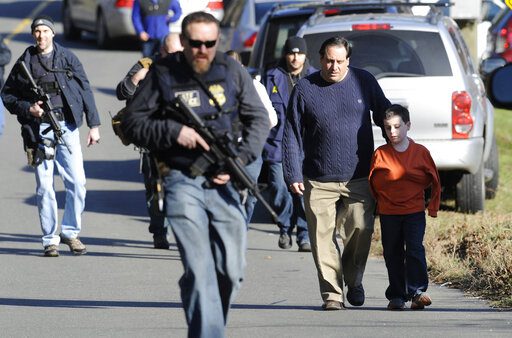 FILE- In this Dec. 14, 2012 file photo, parents leave a staging area after being reunited with their children following a shooting at the Sandy Hook Elementary School in Newtown, Conn. At least 14 children and a teacher were killed in a shooting at a Texas elementary school Tuesday, May 24, 2022, Texas Gov. Greg Abbott said. (AP Photo/Jessica Hill, File)[ASSOCIATED PRESS/Jessica Hill]

HARTFORD, Conn. (AP) — A U.S. senator who came to Congress representing the Connecticut community where 26 elementary school students and educators were killed nearly a decade ago begged his colleagues Tuesday, as the latest school shooting unfolded, to pass legislation addressing the nation’s gun violence problem.

The mass shooting at Robb Elementary School in Uvalde, Texas, nearly 2,000 miles (3,200 km) away from Newtown, Connecticut, felt all too familiar to residents and officials who saw many similarities to the attack by a lone gunman at Sandy Hook Elementary School in 2012.

A gutted Sen. Chris Murphy took to the Senate floor Tuesday and demanded that lawmakers accomplish what they failed to do after 20 children, mostly 6 or 7 years old, and six educators in Newtown, Connecticut died on Dec. 14, 2012. Congress has been unable to pass substantial gun violence legislation since the collapse of a bipartisan Senate effort in the aftermath of that massacre.

“What are we doing?” Murphy asked. The Democrat, who represented Newtown during his time as a U.S. congressman, urged his colleagues to find a compromise.

“I’m here on this floor to beg — to literally get down on my hands and knees — to beg my colleagues. Find a path forward here. Work with us to find a way to pass laws that make this less likely,” he said.

He said he was working with colleagues — and reaching out in particular to Republican Sen. John Cornyn of Texas — to see if they could muster any bipartisan support for gun violence legislation.

Though the party of Democratic President Joe Biden has slim control of Congress, bills on gun violence have been stymied in the face of Republican opposition in the Senate.

Last year, the House passed two bills to expand background checks on firearms purchases. One would have closed a loophole for private and online sales; the other would have extended the background check review period. Both languished in the 50-50 Senate, where Democrats need at least 10 Republican votes to overcome objections from a filibuster.

Tuesday’s tragedy in Texas appeared similar to the Sandy Hook shooting, where a 20-year-old man shot his way into the locked school on Dec. 14, 2012, then killed 20 first graders and six adults with an AR-15-type rifle purchased legally by his mother. He killed himself as police arrived. Before going to the school, he fatally shot his mother at their Newtown home.

“My son never came home from Sandy Hook. My heart bleeds for Texas as I relive Dylan’s murder,” Sandy Hook parent Nicole Hockley wrote in an op-ed for USA Today.

In February, the families of nine Sandy Hook victims reached a $73 million settlement in a lawsuit against the maker of the rifle used in the shooting. The case against Remington, filed in 2015, was closely watched by gun control advocates, gun rights supporters and manufacturers because of its potential to provide a road map for victims of other shootings to sue firearm makers.

The families and a survivor argued the company should have never sold such a dangerous weapon to the public. They’ve said their focus is on preventing future mass shootings by forcing gun companies to be more responsible with their products and how they market them.

“I hope that more people stand up and demand action and demand change and stop just accepting the tweets of thoughts and prayers. That’s not going to save lives. It’s not going to bring people back,” said Erica Lafferty, daughter of Dawn Lafferty Hochsprung, the slain principal of Sandy Hook.

“It’s really just a gun lobby talking point and something that people feel that they need to say in lieu of action,” she told The Associated Press.

Lafferty, program manager at Everytown for Gun Safety and an advocate for universal background checks, said she decided a couple years ago to step back from talking to the media following what became a succession of mass shootings.

On Tuesday, struck by the familiarity of the aerial news shots of an elementary school and the fact the victims included children as young as second grade and educators like her mother, Lafferty thought she’d try to digest what had happened in Texas privately as well.

“I think that lasted maybe five minutes before I hear my mom’s voice in my head: `Get off your butt, kid. This is definitely your time,’” Lafferty said.

Advocacy groups that formed after Sandy Hook also expressed dismay as news of the shooting spread.

“For the past decade, we have warned all Americans, including elected politicians across the nation, that if a mass shooting can happen in Sandy Hook then it can happen anywhere,” Po Murray, chair of the Newtown Action Alliance, said in a written statement.

Connecticut Sen. Richard Blumenthal, a Democrat, tweeted how the “senseless violence will stop only when Congress matches thoughts & prayers with action.”

Murphy acknowledged the problem of gun violence won’t be solved overnight. But, he said, it can be addressed.

“I understand my Republican colleagues will not agree to everything that I may support, but there is a common denominator that we can find,” Murphy said. “But by doing something, we at least stop sending this quiet message of endorsement to these killers whose brains are breaking, who see the highest levels of government doing nothing, shooting after shooting.”