By REBECCA BOONE The Associated Press

FILE - Chad Daybell sits during a court hearing on Aug. 4, 2020, in St. Anthony, Idaho. An Idaho judge has banned cameras from the courtroom in the high-profile triple murder case against a mom and her new husband, saying he fears the images could prevent a fair trial. Lori Vallow Daybell and her new husband Chad Daybell are accused of conspiring together to kill her two children and his late wife. (John Roark/The Idaho Post-Register via AP, Pool, File)[ASSOCIATED PRESS/John Roark]

BOISE, Idaho (AP) — An Idaho judge has banned cameras from the courtroom in the high-profile triple murder case against a mother and her new husband, saying he fears the images could prevent a fair trial.

Seventh District Judge Steven Boyce made the ruling on Friday, saying that news organizations will no longer be able to shoot still photography or videos inside the courtroom in the criminal case of Lori Vallow Daybell and Chad Daybell. The couple are charged with conspiring to kill Lori Vallow Daybell’s two youngest children and Chad Daybell’s late former wife, and the strange details of the case have drawn attention from around the world.

Both Vallow Daybell and Daybell have pleaded not guilty to the charges, which carry a potential death penalty.

Late last month, Vallow Daybell’s attorneys asked the judge to ban cameras from the courtroom. They contended that one news organization abused the privilege by repeatedly zooming in on Vallow Daybell’s face during an Aug. 16 hearing. The attorneys, Jim Archibald and John Thomas, also claimed the cameras and microphones could potentially be used to overhear private conversations or to view private notes on the defense table, though they did not suggest that the equipment had ever actually been used in that way.

A coalition of more than 30 news organizations including The Associated Press asked the judge to reject the defense attorneys’ motion. 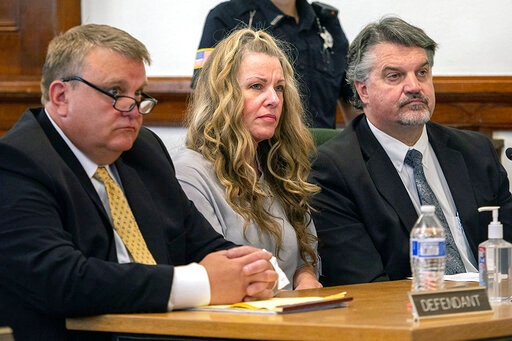 FILE - Lori Vallow Daybell, center, sits between her attorneys for a hearing at the Fremont County Courthouse in St. Anthony, Idaho, on Aug. 16, 2022. An Idaho judge has banned cameras from the courtroom in the high-profile triple murder case against a mom and her new husband, saying he fears the images could prevent a fair trial. Lori Vallow Daybell and her new husband Chad Daybell are accused of conspiring together to kill her two children and his late wife. (Tony Blakeslee/East Idaho News via AP, Pool, File)

Steve Wright, the attorney for the news coalition led by EastIdahoNews.com, told the judge that banning cameras would not stop the widespread public interest in the case but instead prevent people from seeing the most accurate depiction of the proceedings. The news organizations also noted that the coverage was done to inform members of the public, most of whom are unable to attend in person.

Wright told the judge that banning cameras completely would be a “vast overreaction,” but acknowledged that the judge had the authority to limit the visual coverage as he saw fit.

In his ruling, Boyce said there was no indication that the news organizations had ever violated the court orders that allowed cameras in the courtroom.

“The presence of media during the hearings has in no way interrupted those proceedings, and attending media have been respectful and professional,” Boyce wrote in the ruling. Still, the judge said, the concerns raised by the defense attorneys are “well founded.”

Boyce said he has had to proactively avoid viewing the news coverage of the case because it is routinely part of local and sometimes national news. He noted that he has already decided to move the trial across the state to Ada County in hopes of improving the chances of finding impartial jurors.

He said the camera ban would continue even after the jurors for the trial are selected — even though jurors are always admonished not to discuss or consume any news coverage about the case they are working on. Visual news coverage could also taint potential witnesses and stress out the attorneys involved in the case, he said, “knowing their every expression, utterance and appearance will be captured and circulated without their control in perpetuity.”

That pressure could interfere with the “fair administration of justice,” Boyce said.

The couple was eventually charged with murder, conspiracy and grand theft in connection with the deaths of the children and Daybell’s late wife. They have pleaded not guilty and could face the death penalty if convicted.

Prosecutors say the couple promoted unusual religious beliefs to further the alleged murder conspiracies. Lori Vallow Daybell’s former husband, who died while the two were estranged, said in divorce documents that Vallow Daybell believed she was a god-like figure responsible for ushering in the apocalyptical end times. Chad Daybell wrote doomsday-focused fiction books and recorded podcasts about preparing for the apocalypse.

Friends of the couple told law enforcement investigators the pair believed people could be taken over by dark spirits, and that Vallow Daybell referred to her children as “zombies,” which was a term they used to describe those who were possessed.

Vallow Daybell is also charged with conspiracy to commit murder in Arizona in connection with the death of her previous husband. Charles Vallow was shot and killed by Lori Daybell’s brother, Alex Cox, who said it was self-defense. Cox later died of what police said was natural causes.

The Arizona legal proceedings are on hold while the Idaho case is underway and Vallow Daybell has not been scheduled to make a plea in the Arizona case.