Layden: Despite lack of familiar names, track and field surging forward on wings of today's stars 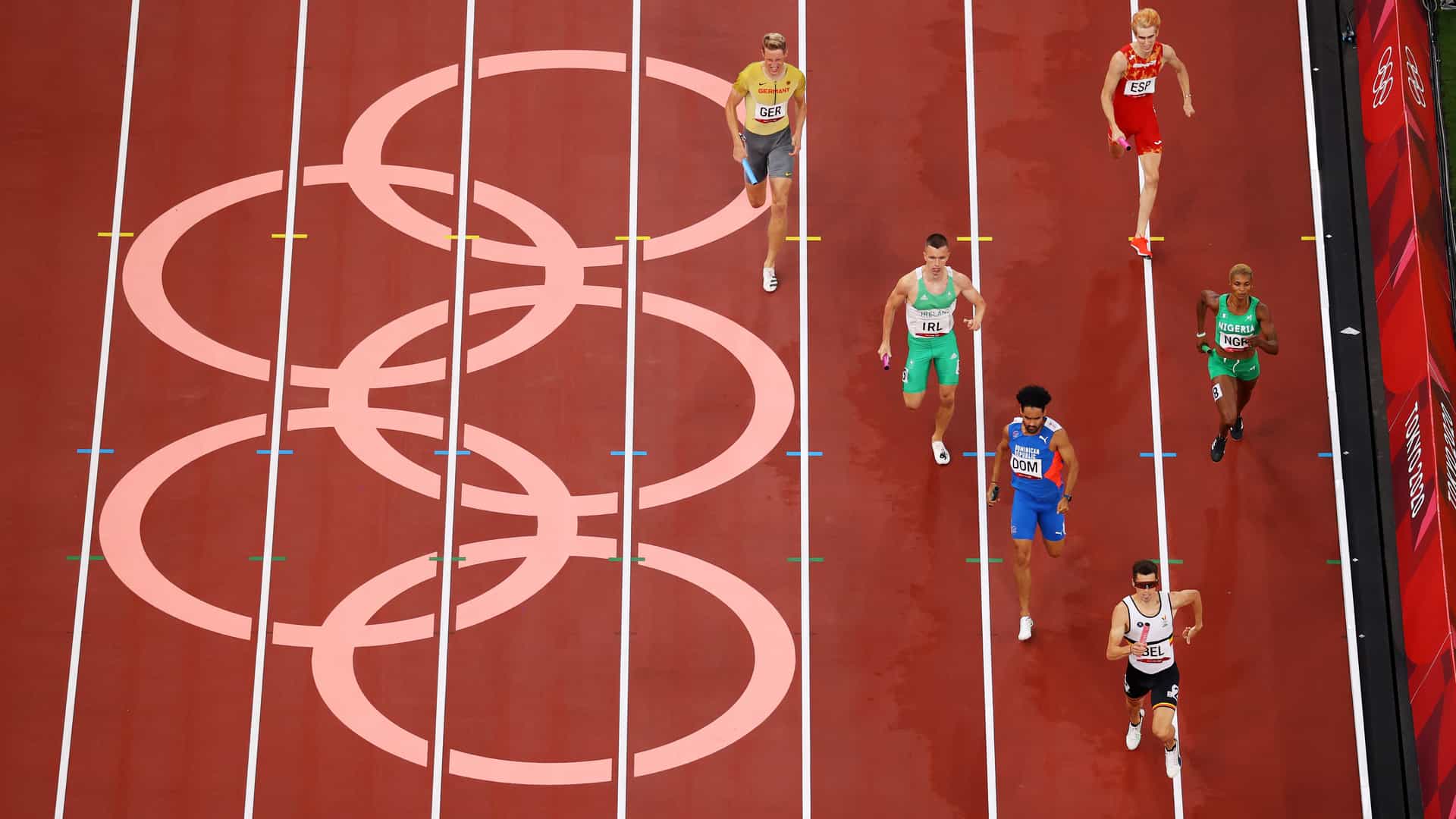 There was such temptation to dwell on the missing, and the gone. As ever, Olympic track and field had risen from hibernation a week past the Opening Ceremony, after waiting, waiting, waiting. As ever, it would be the women's (first) and men's (a day later) 100-meter races that would propel a sport across the second week of the Games. But there was such thunderous absence – exemplified first by an empty stadium, which is not at all like an empty gymnastics arena or swimming hall, but rather so much larger and more cavernous, a hulking reminder of the medical reality on which the 2020/21 Olympic are precariously balanced. There was that and there was more.

The women would race their 100 meters without ascendant 21-year-old American Sha'Carri Richardson, who had been suspended after testing positive for marijuana during her stunning run to the U.S. title in late June. They would race without Nigerian Blessing Okagbare, a genuine medal threat who was tossed between the first and second rounds after an out-of-competition positive test for human growth hormone; and they would race without Great Britain's Dina Asher-Smith, another medal contender, who aggravated a hamstring injury in the semifinals and tearfully withdrew from the Games.

The men would race the 100 meters for the first time since 2004 without Usain Bolt, the world record holder and speedy cartoon superhero who had transformed the sport on a single night in Beijing and carried it on his back for nearly a decade. They would race without the men who chased Bolt and produced the fastest sprint era in history: Jamaican countrymen Yohan Blake and Asafa Powell and Americans Justin Gatlin and Tyson Gay, all of them finished as contenders (or just plain finished). They would race without the defending world champion, American Christian Coleman, suspended for failing to make himself available for drug testing. (As to many of these names, there are fans who will say good riddance; that is another discussion altogether, and a common one. In point of fact, they were all fast, and only Blake was in Tokyo, and he did not reach the final). They would race the final without Trayvon Bromell of the U.S., the fastest man in the world in 2021, who was eliminated after two shockingly desultory rounds.

But it is the larger and evolving truth of these strange Olympics that athletes have determinedly given life where the Games might have collapsed beneath their own unsteady existence. And so it would be with track and field. Where Friday morning dawned with trepidation, Sunday ended with joy, both outrageous and otherworldly.

A Jamaican woman ran nearly faster than any woman in history (and possibly just as fast as any; it's complicated), with two teammates close behind. An Italian man born in Texas won the 100 meters by running three consecutive personal bests at the Olympic Games; it is Italy's first medal of any kind in the 100, a victory which quickly climbed a ladder of adjectives: Unlikely? Unexpected? Unthinkable? Two men – one of them yet another Italian – agreed to share the high jump gold and one woman shattered the 25-year-old world record in the triple jump. An American woman took silver in the shot put and crossed her arms above her head on the medal stand, the most forceful protest of the Games thus far.

It began late Saturday night in Tokyo, when 29-year-old Elaine Thompson-Herah of Jamaica became the fourth woman in history to win consecutive Olympic 100-meter golds, in front of teammate Shelly-Ann Fraser-Pryce, who in 2012 had become the third woman to win back-to-back 100s (American Wyomia Tyus was the first, in '1964-'68; and Gail Devers of the U.S. the second in 1992-'96); Shericka Jackson completed the sweep for Jamaica.

Thompson-Herah rose as she approached the finish line and pointed at the clock on the ground as if demanding it freeze meaningful digits, which it did: 10.61 seconds, .01 faster than Florence Griffith Joyner's 33-year-old Olympic record. "I think I could have gone faster if I wasn't pointing and celebrating, really," said Thompson afterward. Only Griffith's world record of 10.49 is faster, and Griffith Joyner also once ran 10.61, but because this is track and field, there will be discussion and whispered belief that Thompson Herah now shares the world record. Griffith Joyner ran her 10.49 in the quarterfinals of the 1988 Olympic Trials in Indianapolis, and many believe that performance to have been wind-aided, but not captured by a malfunctioning trackside wind gauge. Flo-Jo's time is recognized as the world record, but the Association of Track and Field Statisticians' annual guide carries the caveat: "Probably strongly wind-assisted, but recognized as a U.S. and world record." This will be debated until the record falls, which does not seem imminent.

Likewise, any track fan would wonder how Richardson might have performed in such a blindingly fast race. Richardson's best is 10.72 seconds, but she is still green in the blocks, with spectacular top-end speed. At a minimum, she might have broken up the Jamaican sweep. After the race, Richardson tweeted: "Congratulations to the ladies of Jamaica for the clean sweep. Powerful, strong black women dominating the sport." It was the highest of high ground; and while tomorrow is never promised, Richardson is six years younger than the youngest of the three Jamaicans. (Although there will be more Jamaicans).

Twenty-four hours later, a balding cannonball of a man named Lamont Marcell Jacobs – he goes by Marcell on social media accounts – won the men's 100 meters, a stunning outcome even in the post-Bolt era, even with Bromell inexplicably flaming out, even with.... Anything.

His event came as a remarkable evening faded into night.

Early on, 25-year-old U.S. shot putter Raven Saunders, who competes in a toothy green face covering that she calls her "Incredible Hulk" mask, took silver in her event and after receiving her medal, stepped down off the podium and crossed her arms in an "X" over her head. Saunders, who is openly gay, explained the X: "It's the intersection of where all people who are oppressed meet." It was the most visible and direct protest of the Games.

A few meters away from the podium, next to the track, Yulimar Rojas of Venezuela, an LGBTQ activist who had already clinched the gold medal in the triple jump, soared 15.67 meters (51 feet, 5 inches) to break the record of 15.50 meters that had stood since the 1995 world championships. It was the first track and field medal for a Venezuelan woman.

And then a remarkable high jump in which Italy's Gianmarco Tamberi, tied for first with two-time world champion and two-time Olympic medalist Mutaz Essa Barshim of Qatar, each man at 2.37 meters (7 feet, 9 ¼ inches). As the two jumpers discussed the rules for a decisive jump-off, Barshim asked an official, "Can we have two [medals]?"

The official said yes and Tamberi jumped into the arms of Barshim, the second-highest jumper in history (behind Javier Sotomayor of Cuba, whose world record of 8- ¼ has stood for 28 years). It was type of selfless moment that will live in Olympic lore: "I know for a fact that for the performance I did, I deserve that gold," Barshim said. "He did the same thing, so I know he deserved that gold."

Last came the first Olympic 100 without Bolt since 2004, a lifetime ago. Pause: There is no replacing Bolt. His world records (9.58 for the 100 meters and 19.19 for the 200) could endure for generations, and far beyond that, he brought an ebullience and performance art to track and field of the rarest form. He was sui generis, and his retirement in 2017 created a void that's likely to remain unfilled indefinitely.

Given all that: It's not a terrible twist for the 100-meter writers' room to offer the world to Jacobs -- born in El Paso to an Italian mother and an American father and raised in Italy -- and who was primarily a long jumper until 2018. His first sub-10 was in May and he ran successive PBs through the Olympic rounds: 9.94, 9.84 and 9.80 in the final, followed across the line buy Fred Kerley of the U.S. and Andre deGrasse of Canada. (Bolt's winning time in Rio was just 9.81, the slowest of his three Olympic golds).

Among the first to embrace Jacobs – enthusiastically -- was countryman Tamberi, who leaped into Jacobs's arms at the finish of the 100, just as he had leaped into Barshim's, one man in a top knot and other one shaved clean, both in powder blue, dancing like children at a parade.

In all of this, the missing were still missed, but missed far less. A sport surged forward.