ALBUQUERQUE, N.M. – Four APD officers were injured in a Thursday morning shooting in northeast Albuquerque. Police said the shooting happened while officers were responding to a robbery call near the Dutch Bros on Juan Tabo.

The injured officers were transported to UNM Hospital.

One officer was shot at the base of his neck – above a bulletproof vest – and was taken immediately into surgery. That officer is still in critical condition at this time.

APD spokesman Gilbert Gallegos said an APD service aide rendered aid to the officer that was shot in the arm – using a tourniquet to save the officer’s life. 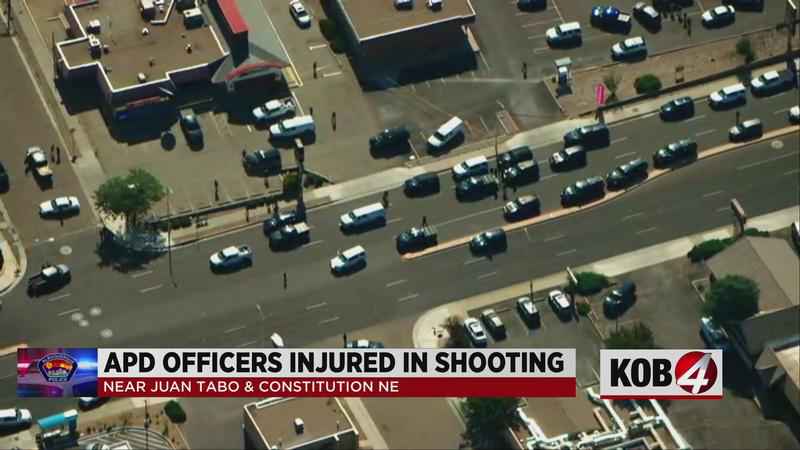 Estaban Ortiz was in line at the Dutch Bros when he suddenly saw two people with backpacks run by his car. He heard police yell at one of them to drop the gun – but the suspect kept on shooting at them.

"He fell down, he had extended magazines, with what appeared to be a 9mm pistol," Ortiz said. "He unloaded the first one completely. After he fell on the floor, he took out that unloaded one, pulled another one out, another extended magazine, popped it back in, and as he was being shot on the floor – he kept returning fire."

Ortiz said he was terrified the suspect would eventually turn and shoot at him.

Police said the suspected shooter is hospitalized, and other individuals have been detained as police sort out everyone’s involvement.

Police have launched an evidence portal for any submissions the public may have.