ROSWELL, N.M. – He is not yet old enough to drive, but a 10-year-old Houston boy is already an officer with nearly 300 law enforcement agencies.

Davarjaye Daniel suffers from an incurable brain and spine cancer. He and his two brothers were sworn in as honorary police officers of the Roswell Police Department Friday.

With their hands held up, Davarjaye and his brothers took the oath.

“Welcome aboard,” Chief Phil Smith of the Roswell Police Department said while standing before an audience.

As they arrived at the station, Davarjaye and his entourage were given a hero’s welcome, with Roswell Police officers and Chaves County deputies greeting them with thunderous applause. 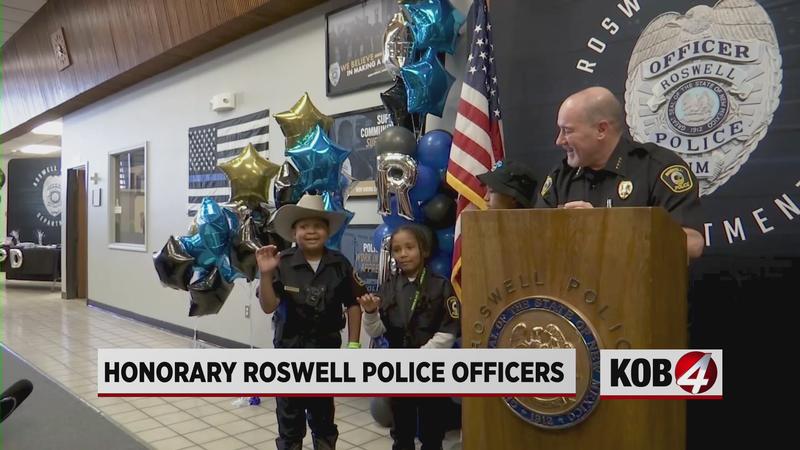 Davarjaye responded by distributing handshakes, hugs and jokes as he made his way through the crowd of law enforcement.

He was presented with badges, hats and even bulletproof vests.

Those local agencies are among 289 that have welcomed Davarjaye to their ranks, and the first ones in New Mexico to do so. So far, the others are across the state of Texas and in Arkansas.

He said travel expenses are paid for through donations from police departments and police benevolent associations.

Davarjaye’s interest in policing goes back to 2017, after he and his family were displaced when Hurricane Harvey battered parts of Texas. They, like so many others in Houston at the time, were forced to seek refuge at a convention center, where there was a heavy police presence.

Davarjaye and his family at the time got to know some of the police officers who were there – something that had a big impact.

“And as you can see, the impression is everlasting, because Davarjaye, he wanted to do the same thing. I guess he wanted to return what he had got,” Daniel said.

The scores of honorary recognition began in Brookshire Texas.

Since September 2018, Davarjaye has been battling cancer, undergoing 11 brain surgeries and numerous other medical procedures.

“When, when I think we all have a bad day in our careers, look at Davarjaye and every other kid out there with a different struggle, we can look back at our struggle and be thankful for what we do,” Aldona said.