ALBUQUERQUE, N.M. — For 14-year-old Chaney Cecil, Taekwondo is a way of life. He has been training at Bates Premier Taekwondo since he was just five years old.

"You don’t really need special things to be good at Taekwondo," Chaney said. "You just need to work hard and just keep coming to practice every single day."

Chaney received his black belt at age 10, even skipping some belts to get there.

"He is an awesome kid, he works his butt off, he is always training," said Chee Bates, Chaney’s coach. "He really has that drive, that hard work. Some people have to look for it, Chaney has it."

Chaney has competed and medaled in more than 40 tournaments nationwide. 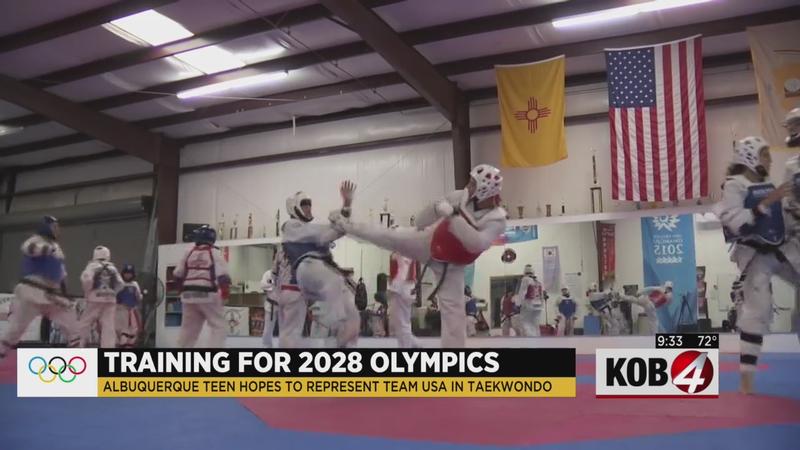 "He was undefeated for a whole entire year," Bates said. "He fought three different countries, won and he just won and won."

One of his biggest accomplishments was when Chaney took home gold during the 2018 U.S. Open.

"I was only 12 at the time and that was the biggest tournament I’ve ever been to," Chaney said. "Didn’t realize I got gold until everyone started cheering."

Now, the Hope Christian high schooler wants to win gold on the biggest stage in sports.

"My end goal is to get a gold at the Olympics," Chaney said. "That keeps me motivated to keep working here every single day."

In seven years, Chaney wants to be in Los Angeles representing Team USA in Taekwondo. His coach believes Chaney could be one of the first in New Mexico to accomplish it.

"Everybody says they want to go to the Olympics," Bates said. "But I think with what his drive is, not only just doing Taekwondo, but other sports, will get him there."