NEW YORK, N.Y. – Family members of loved ones lost in the 9/11 attacks read the names of the thousands of people who died 20 years ago.

U.S. presidents Joe Biden, Barack Obama and Bill Clinton were present as New York and the nation came together to remember.

It was a somber morning at the location we once called Ground Zero — a place where twenty years ago was the center of fear, pain and devastating loss.

“Through the last twenty years, my family and I have at times known unbearable sorrow and disbelief about the lives that would never be,” said Mike Lowe, whose daughter was killed in 9/11 attacks.

Family members read out the names of those lost that day.

“And my uncle, Firefighter Christopher Michael Mazillo. I know you are with us every day watching over us. And even though I never met you in person, I still miss you a lot.

New York firefighters rang a bell one time followed by a moment of silence for each moment of tragic loss:

Katie Murphy was one of thousands to honor a loved one lost that day and to listen for the name of her brother to be read.

“My brother worked for Cantor Fitzgerald—who lost everybody on the 105th floor of the North Tower,” said Murphy. “It’s always powerful. The community where I live in Massachusetts lost a lot of people, so I try to listen for everybody’s names and I go see their names so it’s actually like I’m honoring them and their lives.”

Twenty years ago — we weren’t sure how we would rebuild out of the rubble and ash. The attacks tore into people’s hearts and scarred souls.

But New York City and the country found strength and rebuilt. A sacred promise — that we never forget the lives lost on Sept. 11, 2001. 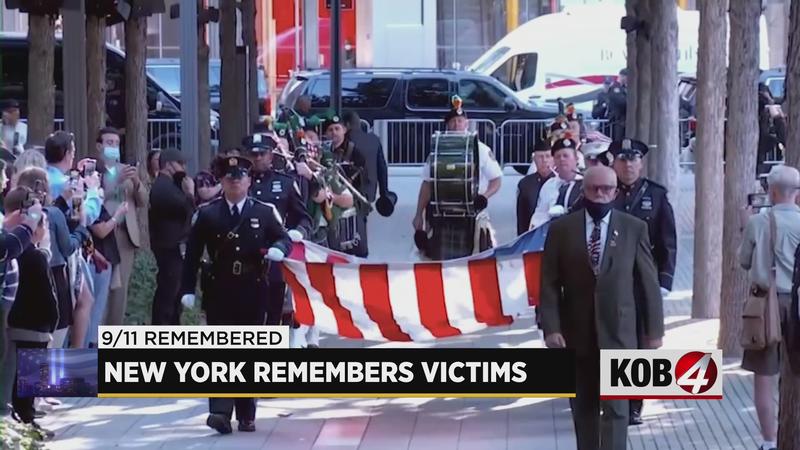