ALBUQUERQUE, N.M.- Three students in the same calculus class at Albuquerque High School learned they were accepted to some of the country’s top universities.

"I literally called Cornell," he said. "I called them, and I was like, ‘Is this real?’"

"I got in to Yale University, Harvard and Stanford," she said. 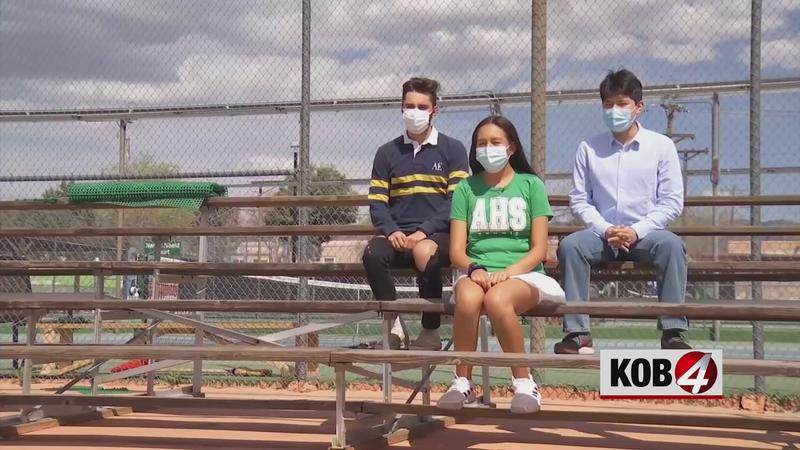 Nena and Caiden have not decided where they will go.

However, their classmate, Agustin Leon-Saenz, finalized his plans.

"I’m planning on attending Harvard University in the fall," he said.

Agustin said he is looking into studying environmental engineering and public policy.

Caiden also plans on learning about the engineering field.

"Kind of want to work in like the biomedical aerospace realm right now," he said.

Nena, a drum major and captain of the tennis team, has a different passion.

"I hope to major in urban studies or architecture," she said.

"I am a citizen of the Navajo Nation, so I’m more interested in seeing how, you know, the Indigenous community has been affected in different cities and the demographics of it," she added.

"As a Latino immigrant from Ecuador, I have a special background that I believe helps me empathize with so many members of our community, especially as they’re affected by inequities," Agustin said.

"Going to these, like, bigger high-ranking schools gives us the opportunity to have a platform to have an impact across the country and across the world," Caiden said.

As Caiden, Agustin and Nena prepare to leave New Mexico, they say they won’t forget their calculus teacher, Jimmy Phillips.

"I’m gonna miss all my teachers at Albuquerque High School, especially Jimmy Phillips," Agustin said. "He’s been such a role model and an inspiration."

"He takes so much pride in his students," Caiden added.

All three students, representing New Mexico, say they are ready for thier next chapter.

"It’s so amazing because we’ve gone through this whole experience together, and kind of seeing us all make it out on the other end, so much stronger, and together, has been super exciting," Caiden said.