Thorn isn’t the first animal the park lost this year. The BioPark has lost ten animals this year. Some might remember the deadly bacterial infection that killed four animals over the summer.

Staff says it’s like losing a family member– it’s a devastating blow to the entire park.

The elephant herd at Albuquerque’s BioPark is missing one of its own.

"I think this is a devastating blow for everyone,” said Bob Lee associate director at Albuquerque BioPark.

"We were very hopeful. Like any disease, you just never know what’s gonna happen. But they fought every day, twenty-four hours a day, to give him the care he needed,” said Lee.

Lee said one in five elephant calves around the world, in zoos or in the wild, die from the virus every year.

"We have successes, we have births, we have moments of joy, but we also have moments like this where we mourn. These animals are like family to us. And so we have the full range of emotions just like they do."

The BioPark community has mourned the loss of nine other animals this year:

In January, one of the oldest animals at the zoo, Azeo the snow leopard, passed away.

In February, a hartmann’s mountain zebra, unexpectedly died two hours after a meal.

"We take care of animals from birth to death and we deal with all the things that happen throughout their lifetimes,” Lee said.

Fast forward to July, when Francis the capybara died after a post-surgery altercation with his sister.

A week later, a female gorilla named Huerfanita died from the same infection.

"People are here 365 days a year whether it’s their kids’ birthdays, or a holiday, or even Christmas Day. They’re here taking care of the animals, so whenever there’s a loss, it’s just like a loss in our own family.”

And in October, a saltwater crocodile named John died from complications from an innovative surgery to repair his broken jaw.

"We honor them every day, I mean they live in our hearts."

The same place that Thorn will live, from now on.

"There’s not a day that goes by that we’re not gonna be thinking about Thorn and the entire elephant herd and how they’re feeling and reacting to this."

Accredited zoos like the BioPark and others around the world are currently looking for a cure for the virus that killed Thorn.

Staff hopes 2022 will bring more successes, and the ability for more people to build a better connection with nature. 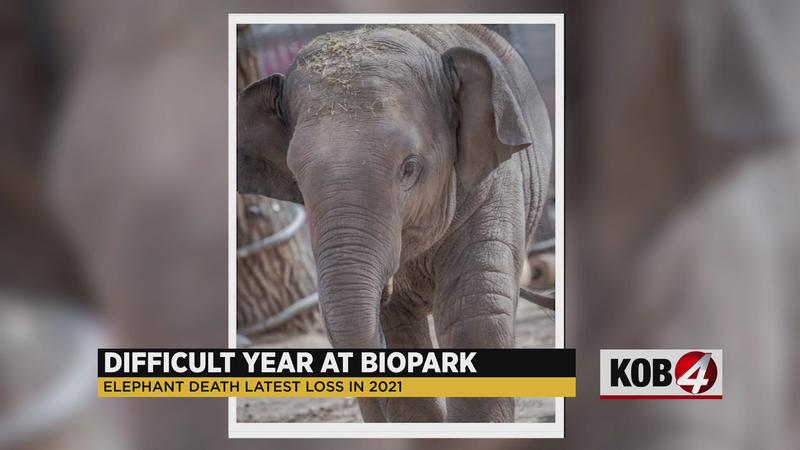