ALBUQUERQUE, N.M. — When construction of the Trump-era border wall was halted by President Joe Biden, it created some unintended consequences for some people living in southern New Mexico.

One New Mexico rancher says since construction stopped in January, he’s noticed an uptick in smuggling activity through his property which sits about 20 miles west of Columbus.

"I’ve got several game camera photos of all these people crossing here," said cattle rancher Russell Johnson. "They’re all wearing the same camouflage, they’ve got the same camouflage backpacks. They’re wearing booties on their feet to conceal their tracks."

Other parts of the border are currently facing a dramatic surge in migrant families and unaccompanied children seeking asylum. However, Johnson believes what’s happening in Luna County is a whole different type of activity, including drug trade.

"They’re coming here for nefarious reasons," said Johnson, whose family has lived in the area for nearly 103 years. 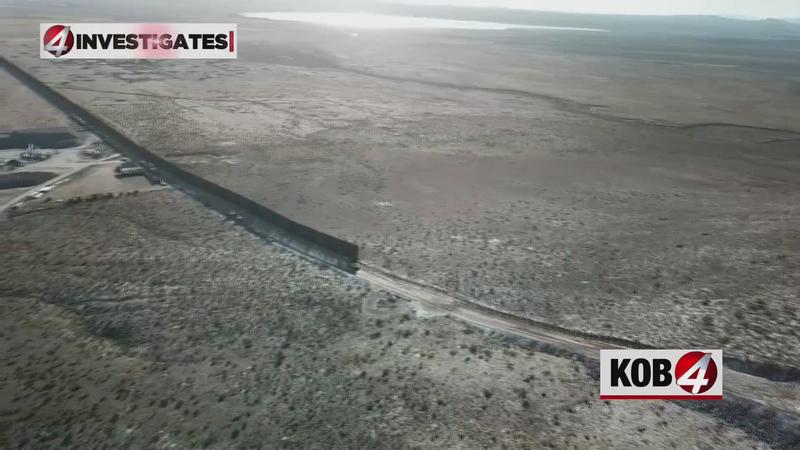 Johnson points to one reason for the recent surge of activity: a three quarter mile gap in the border which was left behind when construction was abruptly halted.

"It was just a kick in the gut to use because they were so close to finishing our area — and now we’re left with this three quarter mile gap," said Johnson. "That’s created a funneling point for all the traffic in this area right into the middle of our ranch."

"It’s just a staging area… so they can cross in these gaps," said Johnson.

In 2020, construction began on miles of new border wall fencing along New Mexico’s southern border. It was part of an expensive multi-billion dollar project at the direction of former President Donald Trump.

However, on January 20, 2021 when President Biden took office, he ordered a 60-day suspension on a border wall construction involving active contracts.

"It’s all here ready to go — ready to put up," said Johnson.

While the White House’s 60-day suspension has already expired, it’s still unclear what the fate of the border wall under President Biden will look like.

POLITICAL DIVIDE ON THE BORDER WALL

"Clearly it’s a national security issue, number one," said Rep. Herrell (R – District 2), who has serious concerns about the border wall, including the cost of canceling dozens of construction contracts and expensive building materials left behind.

"The sheer number of 270-thousand pounds of steel bollard fencing sitting there… and now to know that we’re either going to have to have it destroyed or stored… It’s incredibly expensive," said Rep. Herrell.

Herrell also points out that at least 120 Border Patrol agents have been drawn away from patrolling the border corridor to instead help with the surge of unaccompanied minors and migrant families at other points along the border.

Cattle rancher Russell Johnson says that compromises his number one concern, which is safety.

"First and foremost it’s always the safety of our family. I’ve got a family, I’ve got children and they’re exposed to this stuff. They see stuff on a daily basis. You see border patrol chasing groups and you never know who’s going to be walking up to your house," said Johnson.

However, some critics are calling for President Biden to dismantle sections of the wall built by Trump.

In March, New Mexico Congresswoman Teresa Leger Fernandez (D – District 3) joined other border state representatives in a letter calling on the White House to "commit to not initiate new contracts or resume construction activities" at the border.

"We need to go about this process of taking the wall down and doing so in a manner that is respectful of our environment and our local communities," said Leger Fernandez.

However, Johnson believes finishing the border wall on the stretch of border that includes his ranch is crucial for his community.

"I’m afraid that it’s going to take something horrifically tragic before they even lift the finger and take notice of this issue," said Johnson.