4 Investigates: Albuquerque dentist without a license

ALBUQUERQUE, N.M. — William Gardner has been protesting his revocation for years, but he’s not supposed to be seeing patients in the meantime. A new filing in a criminal case against him says he’s doing just that.

Gardner’s website touts him as one of Albuquerque’s best dentists, capable of a litany of general and advanced cosmetic procedures – none of which he’s supposed to be performing.

The New Mexico Board of Dental Health Care suspended Gardner’s license, and then revoked it entirely. In a mountain of court documents, Gardner was warned not to practice his craft.

Now, a motion in a criminal case – 36 counts of tax fraud – says that "the public is endangered" and Gardner should go to jail because an undercover investigator caught Gardner still doing dentistry.

4 Investigator Matt Grubs: I have to ask, should you have been open and seeing patients if the revocation was active in July of last summer?

William Gardner: Well, my office is open, but we’re not seeing patients.

4 Investigator Matt Grubs: So, you’re paying people just to have an open office?

Gardner told KOB 4 Wednesday that he’s been beset by poor legal representation and a relentless attack by state agencies that don’t have the jurisdiction to prosecute him. 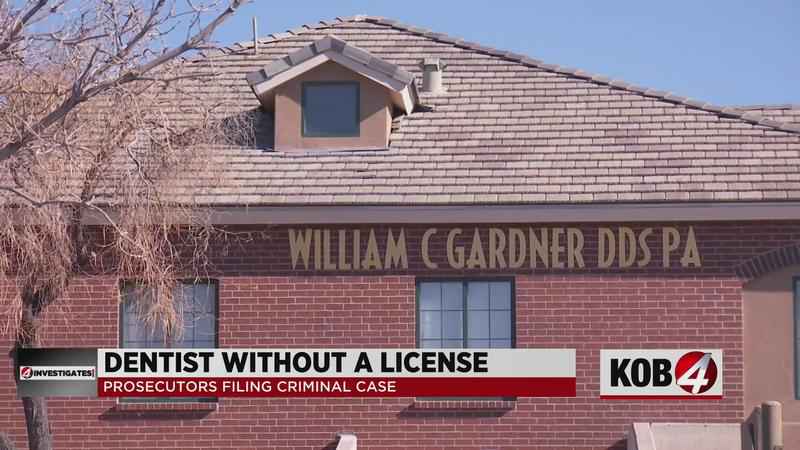 He sent KOB 4 a letter from the Tax and Revenue Department, saying it shows he’s not delinquent on taxes. He claims it is a mix-up that is just weeks from being resolved.

The New Mexico Attorney General’s Office is involved in cases concerning Gardner and wouldn’t comment specifically, but said flouting regulations, the law, or a court order is serious business.

"In my mind, it would be one of those warning signs that if this person is not taking their licensing and regulatory obligations seriously, then they may also not be taking other obligations seriously depending on the industry we’re talking about," said Brian McMath with the state attorney general’s Consumer and Environmental Protection division.

Gardner is due in court next month on the tax fraud charges. An older criminal case for insurance fraud is still pending.