Rules are a fact of life. They tell us to slow down, or to mask up. Like them or not, the rules are meant for all of us.

Albuquerque’s Human and Ethical Animal Rules and Treatment – or HEART – ordinance impacts everyone in Albuquerque. In fact, when it comes to spaying or neutering dogs and cats, it impacts everyone in Bernalillo, Valencia, Sandoval, Santa Fe, Cibola and Torrance counties if their unaltered pet ends up in a city animal shelter.

No companion animal is to leave the shelter for adoption without a rabies vaccination, a microchip and an operation to spay or neuter the animal. It’s the city’s most important tool in controlling the at-times-overwhelming pet population.

But the Eastside Animal Shelter made an exception for an Albuquerque policeman that violated its own rules.

“We made a call on this one,” said Animal Welfare Department Director Carolyn Ortega, “And we will likely not do it again. It was just…it was the perfect storm."

In its 20,000-plus words, the HEART ordinance doesn’t provide for a “perfect storm” exception. Its stringent rules are why the case of a one-year-old Belgian Malinois at the Eastside Shelter is so interesting.

The dog, a female, wasn’t spayed when she was brought in on Oct. 29. The breed, which resembles a German Shepherd, is known for being determined, smart, and a popular choice for law enforcement K9 units. Within minutes of being walked into the shelter’s admissions lobby, the animal had a $20 priority hold placed on it by Albuquerque Police Department Sgt. Jason Saavedra.

The APD veteran works with the department’s K9 unit and, according to the city, had been filling his police unit at the city gas pumps next to the shelter. Animal Welfare officials say he recognized the woman bringing in the stray dog, asked about it, and followed the pair into the shelter. It’s a circumstance department director Ortega called “unique.”

After the dog became available for adoption, shelter records obtained by KOB 4 show Saavedra asked a shelter supervisor to give him the dog “intact” – or without being spayed. It’s a request the city should have denied, according to the HEART ordinance. The records show the shelter supervisor knew Saavedra worked with the Police Department and that Saavedra planned “to train this dog as a personal protection pet for his family. He asked for this consideration due to concerns about sterilization prior to two years old possibly causing issues with growth, drive and health.”

The HEART ordinance gives one exception for spaying or neutering: the health of the animal, as documented by a veterinarian. The dog’s file contains no evidence that ever happened; instead showing several times that Animal Welfare Operations Manager Joel Craig approved the dog’s adoption to Saavedra with only the promise that the officer would have her spayed within a year.

That exception alone raised the eyebrows of city employees, one of whom contacted KOB 4 and asked to remain anonymous for fear of workplace retribution.

“They don’t get to do it,” the employee said of the shelter’s decision. “We have never done that.”

The rules are so strict that if the dog had been claimed by its owner, the city still would not have released it without first altering the animal. That’s unless it was the first time in the shelter for a dog that had an “intact” permit; a document that lets an owner have an animal that can be bred. On Nov. 2, Saavedra left with both the dog and an intact permit.

Again, the employee said, it’s something that doesn’t happen for a member of the general public.

“We are making them follow the ordinance of the city, but we are allowing someone else not to follow the same ordinance that applies to everyone else? That doesn’t make any sense,” the employee said.

That’s especially true because Saavedra has a second file in the city’s system with a second internal identification number and a second intact permit for another Belgian Malinois. A male.

Reached by phone, Saavedra told KOB 4 that the dog, now named Xyra, is not being bred. He said he’d contacted a breeder for advice and that the breeder told him an unaltered dog would be a healthier dog. Saavedra did not say whether he’d submitted any sort of veterinary documentation regarding the dog’s health as required by city law.

The body of veterinary work on the health effects of spay/neuter ordinances isn’t as exhaustive as one might think, said Dr. Heather Weir. A professor at Colorado State University’s highly regarded College of Veterinary Medicine and Biomedical Sciences, Weir teaches spay/neuter to veterinarians.

“Yes, there can be exceptions individually,” she said. “Sometimes an animal is just not healthy enough to undergo surgery at the time of adoption.”

Dr. Weir said Belgian Malinois are considered skeletally mature – an important marker for spay or neuter readiness – at 9 months to a year. In addition, the argument for keeping a female intact for training purposes is not a strong one.

“For the female, estrogen really isn’t that same kind of steroid (as testosterone),” she said. “And so I’m not sure you’re really going to get much in the way of muscle development or drive change in a female as you would in a male.”

“Trying to keep track of individual animals that go out unaltered and then making sure that their owners are following through with that sterilization becomes, really, a management nightmare for a shelter. And then it also becomes, what if they say they’re just not going to do it? Are you really going to go in and take the animal back from them?” Dr. Weir explained.

From the shelter’s point of view, the policeman and the dog were a nearly ideal match. He had experience with the breed and, perhaps more importantly, Ortega said, they expected this would be the last they’d see of the animal. She said the second intact permit, however, concerned her.

“That does bother me,” she said. “I didn’t know that ’til after the fact."

Xyra won’t be seized by the city, which continues to be understaffed and overcrowded at both its shelter facilities.

While shelter staff would have known Saavedra was a police officer, he was apparently not acting in an official capacity. Albuquerque Police did not comment for this story. 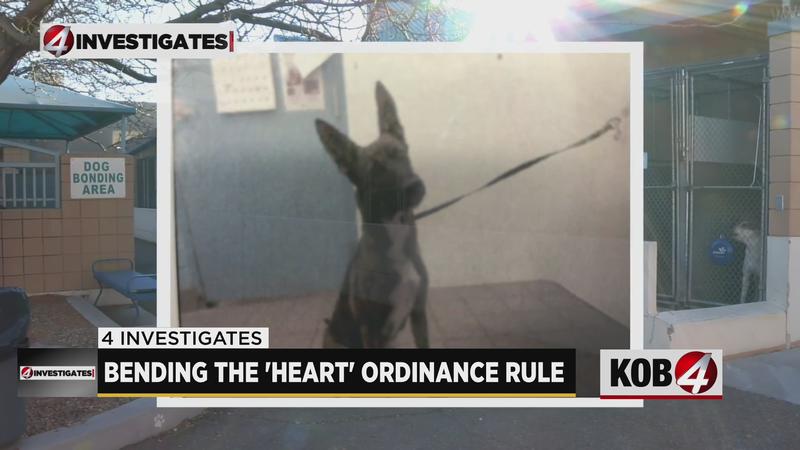