ALBUQUERQUE, N.M. — Since schools switched to remote learning in March 2020, hundreds of thousands of New Mexico parents and guardians have depended on an emergency federal program that’s meant to replace free and reduced-price lunches served at school.

"When they’re not in school, they eat so much more,” said Ashley CdeBaca, whose two kids went to elementary school in Las Vegas last year, Albuquerque this year. She spent much more time each day making snacks, shopping to make sure her kids had food to eat, or preparing lunch.

"And so like the extra P-EBT, it helped tremendously,” she said.

Through a complex reporting web that started with schools, passed through the state Public Education Department and finally landed at the Human Services Department, the government passed along money for P-EBT, or Pandemic Electronic Benefits Transfer. 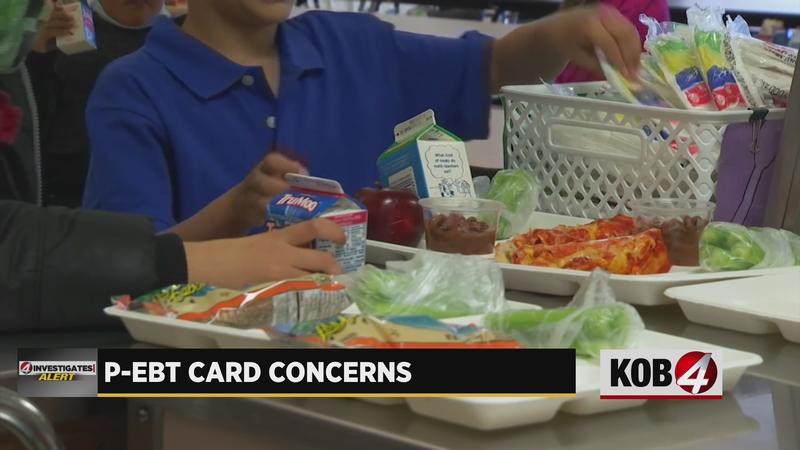 The one easy part: calculating how many days’ worth of benefits to pay each student. With everyone at home all the time, each student’s benefits were the same.

When kids returned to the classroom last April, though, the program’s new reimbursement requirements meant only about one-third of students qualified. And the school-absence reporting web became tangled.

Students now qualify for aid only if they miss five or more consecutive days in a calendar month for COVID-related reasons — including school closures for outbreaks. The school must also code and report those absences correctly. Then, those missed days have to make their way through the two state agencies.

But according to state officials, more than 200 schools either stopped reporting absences to the program last spring or weren’t prepared for a student-by-student, absence-by-absence reporting regime. The P-EBT program nearly ground to a halt, and by the time the state promised families they’d receive reimbursement for April and May of 2021, it was almost the end of January 2022.

Many parents were confused and angry, and the state had to enlist extra help to handle all the calls and emails from people wondering why their help had disappeared.

"Has it taken so long because they kind of don’t know how to handle this or what they’re doing, in a way? Just because they’ve never had to do it,” wondered CdeBaca. “I’m not trying to be mean about it, I just don’t really know."

The state has scrambled to create a searchable database of children who qualify for the latest P-EBT issuance (the April/May 2021 payment), but because of the reporting problems, some children who should qualify won’t be listed.

It’s a frustrating situation for families; one that’s been made clear to the state through the tidal wave of phone calls and emails.

"So the families were now having to pay for these meals, which can be a huge expense for the families if they have large families. Even with one child, it can get expensive to provide meals for children," said Marisa Vigil, who directs policy and program development for the state’s Human Services Department.

Vigil said New Mexico is one of just a handful of states still administering the program in the current school year. But it seems the slow payments are part of the cost as it becomes harder to determine who qualifies. The state is only now paying benefits for missed school days in August and September of last year.

"It’s a continuous communication update," said Vigil, who noted the state is proud to be able to offer assistance this far into what’s also been a trying school year for many families and school staff.

Ashley CdeBaca said she’s had help from family during the pandemic — something she knows not every parent has — and she’ll understand if her kids no longer qualify under the new rules, she just wishes figuring out whether they do wasn’t such a confusing process.