ALBUQUERQUE, N.M.- When marijuana officially becomes legal in New Mexico next month, law enforcement agencies across the state are going to be forced to adjust their policing tactics. Many people may not realize — that includes their drug sniffing K-9s.

At the Farmington Police Headquarters, Sgt. Luther Mosely and his longtime K-9 partner Hasso are specialized in narcotics detection.

Lapel video from one case shows Hasso leading officers to two pounds in heroin and $35,000 in cash stashed in the car. 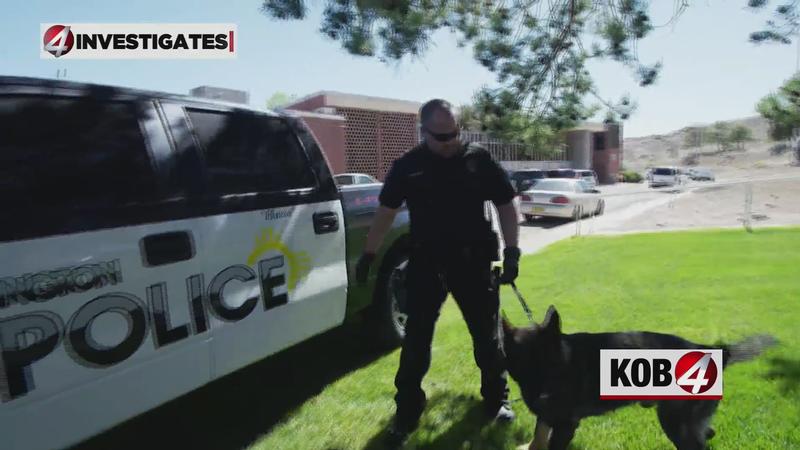 "He will be one of the dogs that’s out of service for narcotics," said Sgt. Mosley.

The reason Hasso and one other Farmington K-9 will be taken off narcotics detection boils down to New Mexico’s legalization of marijuana.

Farmington Police Chief Steve Hebbe said his department’s dogs that are trained to detect marijuana will soon be retired out of that specialization because those K-9s pose a problem for establishing probable cause.

"From the start, for the justice system that wrecks it," said Chief Hebbe.

THE PROBABLE CAUSE PROBLEM

While a K-9 can indicate that a drug is present, it can’t communicate which drug. That means the K-9’s handler can’t determine if the dog found meth, heroin or a legal amount of marijuana.

"So now marijuana is legal — if the dog alerts on it, and we got a search warrant, we’d be violating somebody’s rights," said Chief Hebbe. "That meant the easiest, simplest thing was to just stop using those dogs for that purpose."

Once the dogs are trained to detect marijuana, they cannot be untrained or retrained.

Across New Mexico, law enforcement agencies are grappling with how to handle the changing legal landscape with marijuana. Additionally, the cost of replacing K-9s can cost tens of thousands of dollars per dog.

For example, earlier this year when state lawmakers worked to pass the Cannabis Regulation Act, the Department of Public Safety warned of the financial fallout.

A fiscal impact report reveals that the legalization of cannabis "would require replacement of all of DPS’ drug sniffing dogs." The report estimates that replacing all nine dogs at State Police would cost about $194,000, including training. However, a spokesperson for NMSP says the department is still evaluating what it will do regarding the dogs.

As for Albuquerque Police, the department only has one drug detection K-9 and an APD spokesperson said they have no plans to retire it.

"Just because the laws around marijuana have changed does not mean we will retire ours. There will always be a need for drug detection K-9s especially when making large drug seizures," said an APD spokesperson.

However, it’s still unclear how APD will work around the probably cause issues that seem to worry other law enforcement agencies across the state.

Back in the four corners region, Farmington Police Chief Hebbe insists drug detection is a critical part of police work, especially with meth a major problem in the area.

"These are serious drugs that are having devastating consequences on New Mexicans across the state and weakening law enforcement’s ability to detect these drugs, you know, is very bad overall," said Chief Hebbe.

While Chief Hebbe said re-thinking their K-9 strategy is a slight setback, he also worries about how quickly law enforcement agencies across New Mexico can adapt to the new marijuana landscape.

"We are fortunate. I’m not pretending that it’s the end of the world for us. We’re going to adjust just fine– we’ll be okay here in a couple of months. We’ll be back on board, but for departments across the state… I think there’s going to be serious problems," said Chief Hebbe.