ALBUQUERQUE, N.M. – There’s a new problem brewing at Albuquerque animal shelters and it’s because of the pandemic.

Workers say some gentle dogs are becoming more and more dangerous. In fact, one employee was recently mauled by a dog that behavioral scientists said was safe.

Throughout the summer, past and former employees and volunteers reached out to 4 Investigates, asking KOB 4’s team to look into the situation, inside the city’s animal shelters, that is turning ordinarily non-aggressive dogs into dangerous ones.

“My level of concern is very high. I left my job, so I can speak out for the animals of Albuquerque,” said Deana Case, a former Animal Welfare Department employee.

Deana Case was once an Animal Behavioral Specialist for the City of Albuquerque. After she quit, she agreed to speak to KOB 4 on behalf of the many others who reached out, but felt they couldn’t go on camera in fear of losing their jobs. She worked with dogs that increasingly became stressed while at the shelter.

“They haven’t had a lot of human contact during their stay in the shelter. And often their body chemistry is so elevated, that it causes actual permanent changes to the brain. Physiological changes happen from stress and trauma to people and animals,” said Case.

Case believes the dog mauled this shelter employee because it had lived in an untenable situation for too long.

“She went in to scoop his kennel and this very young herding breed dog who had been there for months without enough exercise, no enrichment level human contact, he mauled her.”

Case said the employee had nearly three dozen punctures, the dog nicked a vein and the employee was taken away by ambulance. That dog’s fate — euthanasia.

Deana Case, along with several others, told KOB 4 dogs are becoming more stressed because of two major issues: there are simply not enough people to care for all the animals and there are just too many animals.

“So this is how full the shelter is right now. These dogs are living outside because there is no room inside the physical shelter,” said Case.

Cell phone video and photos provided to 4 Investigates show animals are in areas meant for short-term use, like the intake area, where animals are supposed to be for a few minutes, but dogs would live there for days.

“The overcrowding issues cause all of the animals to be anxious they have digestive problems. They develop hyper kinesis where they are doing stereotypies such as spinning finger-painting with their poop. The cats tend to hide in the back under their beds, they don’t come out and socialize. The noise level is just overwhelming and it increases aggressive and anxious behavior in the animals,”said Case.

Right now, the Animal Welfare Department has a 30% job vacancy rate. The people who should be working with the dogs simply aren’t there, and that has led to dogs staying inside their cages for 23-24 hours a day for weeks or months.

KOB 4 took Case’s concerns to the city’s Animal Welfare Department Director, Carolyn Ortega, and she admits– she did get creative with where to house animals.

“We are a public shelter and we don’t close our doors when we get to capacity. We did create temporary housing space for those because we knew we were going to be overcapacity,” said Ortega.

Ortega said at the beginning of the pandemic, she was ordered to stop spay and neuter surgeries.

“To preserve PPE for the hospitals,” she said.

And she believes that directive had a devastating ripple effect on the city’s pet over-population problem, and combined with a nationwide worker shortage — she acknowledges the problems.

“Some of these positions are really hard to fill,” said Ortega.

But she said she has been interviewing and offering jobs for positions that have direct contact with the animals.

More videos and photos show the shelters violate the city’s own animal laws.

The HEART Ordinance requires shelters to keep animals in temperatures between 60-80 degrees.

But a photo of the thermostat last winter shows the temperature inside the kennels significantly below that.

“So it’s 7:30. It has dipped down to 16 degrees with the windchill. The dogs are still outside and water is coming inside the guillotines and freezing. So it is snowing now and there are dogs out.”

This past summer the swamp coolers have been broken — forcing staff to bring in these loud industrial fans.

“We have brought in some development people to look into our air conditioning and figure out the best approach to making sure we are within that 60-80 in accordance with the HEART Ordinance,” said Ortega.

And the shelter has a rodent problem, staff have expressed concerns that animals are eating poisoned mice.

An email obtained by 4 Investigates reads:

"Cash has become ill and I suspect he may have ingested a poisoned mouse. He eats the mice often and I fear this may become an issue. Gerty in B01 had dying mice in her kennel this evening."

With all these issues, staff have questioned whether Mayor Tim Keller chose the right person to lead the department out of this chaos. Ortega has no prior experience working in animal shelters. KOB 4 asked Mayor Tim Keller about that.

4 Investigator Chris Ramirez : You’ve been accused of hiring a director who isn’t qualified to be the director of Animal Welfare and has no shelter experience. Is that true?

Keller: "Well, we did this on purpose. Often in city departments where they have had long-standing issues, you need an outsider. All I want from our Animal Welfare Director is to let the experts run the department, and I want them to manage that all those high level things that were happening, aren’t happening before."

“You cannot just stack them in cages like cord wood. They are living social beings,” Case said.

And the others she is speaking for, they said it’s time to prioritize the welfare of the animals. 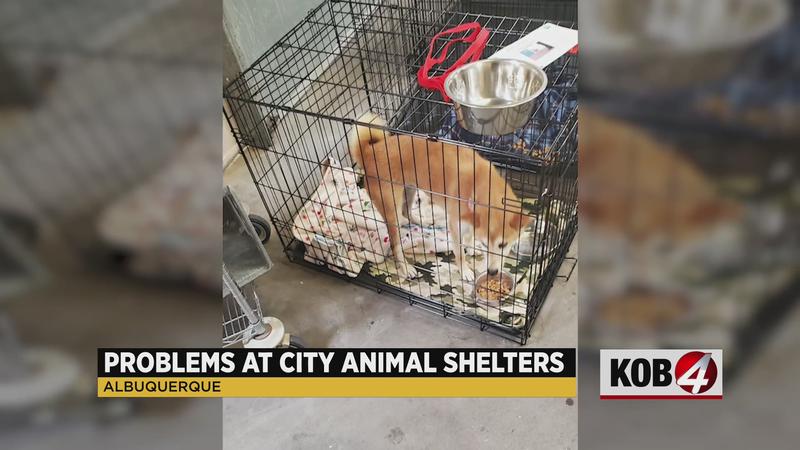