ALBUQUERQUE, N.M. — There are new calls for transparency involving the Albuquerque Police Department’s use of gunshot detection technology and the data that comes with it.

APD is currently in the middle of a 3-year $1.2 million contract with the California-based company Shotspotter, which provides six miles of gunshot detection technology throughout parts of Albuquerque. Alerts and other information are sent directly to police officers’ cell phones.

The KOB 4 Investigates team sought a comprehensive understanding about the effectiveness of the Shotspotter program and whether it’s providing real results.

Under New Mexico’s Inspection of Public Records Act, the KOB 4 Investigates team requested a year’s worth of Shotspotter data from APD. The records reveal more than 1,700 gunshot detections during that timeframe.

However, the data provided via APD was incomplete. There was no information about where the gunshots were detected or whether they resulted in arrests. 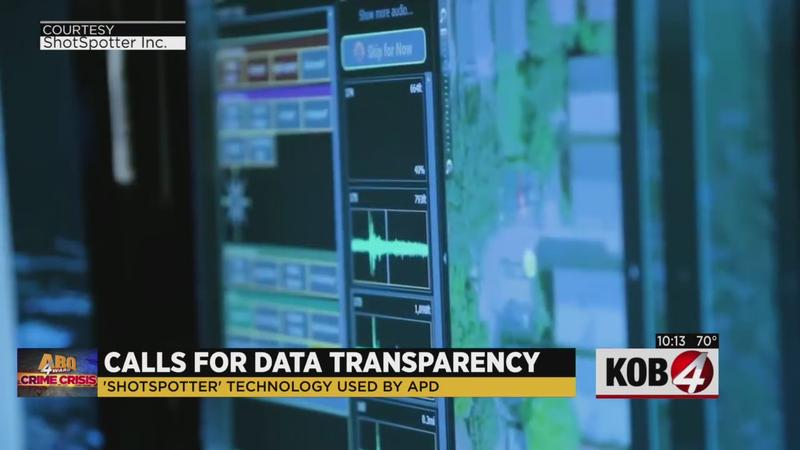 In a letter provided by Shotspotter, the company said per its contract with the agency, “the Albuquerque Police Department is expressly prohibited from distributing or making our Data or records available to anyone outside the agency."

However, transparency advocates say data produced for a public agency should be made public.

“If public money is involved in the purchase of anything for an agency, then that item, data, information belongs to the public. It’s paid for with taxpayer dollars and that belongs to the taxpayer,” said Melanie Majors, executive director of the New Mexico Foundation for Open Government.

The KOB 4 Investigates team recently raised the issue with APD Commander Lenny Nerbetski who heads up the department’s use of the Shotspotter technology.

Nerbetski: “Shotspotter actually owns the data. They actually own the data that they collect and they make it available to us”

Nerbetski: “That’s their standard terms. That’s with every client that they have out there.”

However, NMFOG leadership points to a 2019 court case that found private companies doing work for a public agency are subject to New Mexico’s Inspection of Public Records Act.

“If it’s paid for with taxpayer dollars and the police have the records then they should be open to inspection by the public,” said Majors.

The KOB 4 Investigates team is continuing to push the city to release all of the data that was originally requested. The city clerk’s office has indicated they are reviewing the matter again.